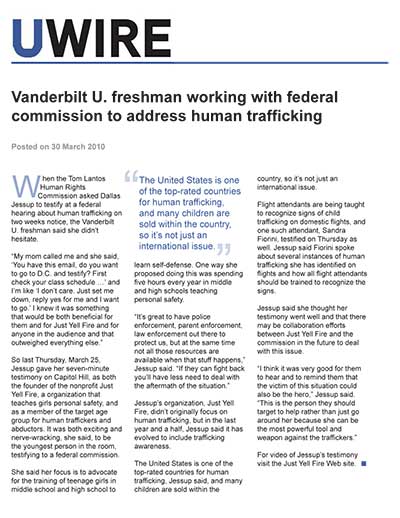 When the Tom Lantos Human Rights Commission asked Dallas Jessup to testify at a federal hearing about human trafficking on two weeks notice, the Vanderbilt U. freshman said she didn’t hesitate.

“My mom called me and she said, ‘You have this email, do you want to go to D.C. and testify? First check your class schedule ...’ and I’m like ‘I don’t care. Just set me down, reply yes for me and I want to go.’ I knew it was something that would be both beneficial for them and for Just Yell Fire and for anyone in the audience and that outweighed everything else.”

So last Thursday, March 25, Jessup gave her seven-minute testimony on Capitol Hill, as both the founder of the nonprofit Just Yell Fire, a organization that teaches girls personal safety, and as a member of the target age group for human traffickers and abductors. It was both exciting and nerve-wracking, she said, to be the youngest person in the room, testifying to a federal commission.

She said her focus as to advocate for the training of teenage girls in middle school and high school to learn self-defense. One way she proposed doing this was spending five hours every year in middle and high schools teaching personal safety.

“It’s great to have police enforcement, parent enforcement, law enforcement out there to protect us, but at the same time not all those resources are available when that stuff happens,” Jessup said. “If they can fight back you’ll have less need to deal with the aftermath of the situation.”

Jessup’s organization, Just Yell Fire, didn’t originally focus on human trafficking, but in the last year and a half, Jessup said it has evolved to include trafficking awareness.

The United States is one of the top-rated countries for human trafficking, Jessup said, and many children are sold within the country, so it’s not just an international issue.

Jessup said she thought her testimony went well and that there may be collaboration efforts between Just Yell Fire and the commission in the future to deal with this issue.

“I think it was very good for them to hear and to remind them that the victim of this situation could also be the hero,” Jessup said. “This is the person they should target to help rather than just go around her because she can be the most powerful tool and weapon against the traffickers.”