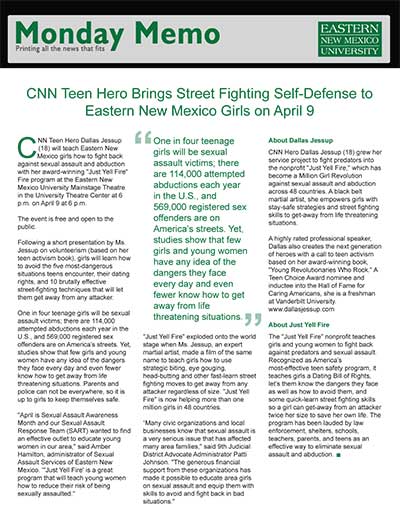 The event is free and open to the public.

Following a short presentation by Ms. Jessup on volunteerism (based on her teen activism book), girls will learn how to avoid the five most-dangerous situations teens encounter, their dating rights, and 10 brutally effective street-fighting techniques that will let them get away from any attacker.

One in four teenage girls will be sexual assault victims; there are 114,000 attempted abductions each year in the U.S., and 569,000 registered sex offenders are on America’s streets. Yet, studies show that few girls and young women have any idea of the dangers they face every day and even fewer know how to get away from life threatening situations. Parents and police can not be everywhere, so it is up to girls to keep themselves safe.

"April is Sexual Assault Awareness Month and our Sexual Assault Response Team (SART) wanted to find an effective outlet to educate young women in our area," said Amber Hamilton, administrator of Sexual Assault Services of Eastern New Mexico. "'Just Yell Fire' is a great program that will teach young women how to reduce their risk of being sexually assaulted."

"Just Yell Fire" exploded onto the world stage when Ms. Jessup, an expert martial artists, made a film of the same name to teach girls how to use strategic biting, eye gouging, head-butting and other fast-learn street fighting moves to get away from any attacker regardless of size. "Just Yell Fire" is now helping more than one million girls in 48 countries.

“Many civic organizations and local businesses know that sexual assault is a very serious issue that has affected many area families," said 9th Judicial District Advocate Administrator Patti Johnson. "The generous financial support from these organizations has made it possible to educate area girls on sexual assault and equip them with skills to avoid and fight back in bad situations."

CNN Hero Dallas Jessup (18) grew her service project to fight predators into the nonprofit "Just Yell Fire," which has become a Million Girl Revolution against sexual assault and abduction across 48 countries. A black belt martial artist, she empowers girls with stay-safe strategies and street fighting skills to get-away from life threatening situations.

A highly rated professional speaker, Dallas also creates the next generation of heroes with a call to teen activism based on her award-winning book, "Young Revolutionaries Who Rock." A Teen Choice Award nominee and inductee into the Hall of Fame for Caring Americans, she is a freshman at Vanderbilt University. www.dallasjessup.com

The "Just Yell Fire" nonprofit teaches girls and young women to fight back against predators and sexual assault. Recognized as America’s most-effective teen safety program, it teaches girls a Dating Bill of Rights, let’s them know the dangers they face as well as how to avoid them, and some quick-learn street fighting skills so a girl can get-away from an attacker twice her size to save her own life. The program has been lauded by law enforcement, shelters, schools, teachers, parents, and teens as an effective way to eliminate sexual assault and abduction.