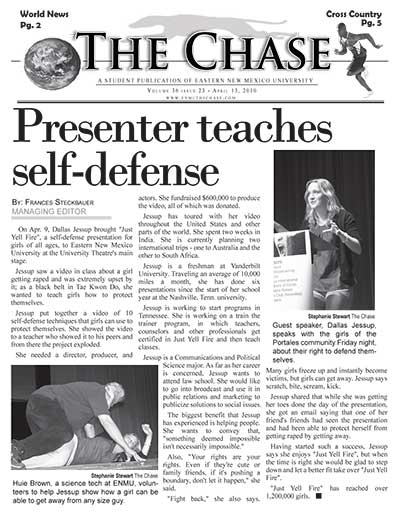 Jessup saw a video in class about a girl getting raped and was extremely upset by it; as a black belt in Tae Kwon Do, she wanted to teach girls how to protect themselves.

Jessup put together a video of 10 self-defense techniques that girls can use to protect themselves. She showed the video to a teacher who showed it to his peers and from there the project exploded.

She needed a director, producer, and actors. She fundraised $600,000 to produce the video, all of which was donated.

Jessup has toured with her video throughout the United States and other parts of the world. She spent two weeks in India. She is currently planning two international trips - one to Australia and the other to South Africa.

Jessup is a freshman at Vanderbilt University. Traveling an average of 10,000 miles a month, she has done six presentations since the start of her school year at the Nashville, Tenn. university.

Jessup is working to start programs in Tennessee. She is working on a train the trainer program, in which teachers, counselors and other professionals get certified in Just Yell Fire and then teach classes.

Jessup is a Communications and Political Science major. As far as her career is concerned, Jessup wants to attend law school. She would like to go into broadcast and use it in public relations and marketing to publicize solutions to social issues.

The biggest benefit that Jessup has experienced is helping people. She wants to convey that, "something deemed impossible isn't necessarily impossible."

Also, "Your rights are your rights. Even if they're cute or family friends, if it's pushing a boundary, don't let it happen," she said.

"Fight back," she also says. Many girls freeze up and instantly become victims, but girls can get away. Jessup says scratch, bite, scream, kick.

Jessup shared that while she was getting her toes done the day of the presentation, she got an email saying that one of her friend's friends had seen the presentation and had been able to protect herself from getting raped by getting away.

Having started such a success, Jessup says she enjoys "Just Yell Fire", but when the time is right she would be glad to step down and let a better fit take over "Just Yell Fire".