Learn Self Defense with New Site 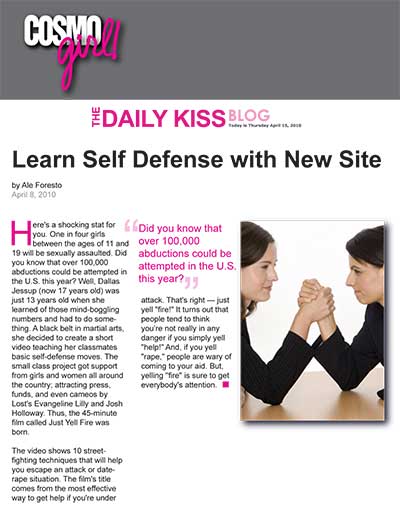 Here's a shocking stat for you. One in four girls between the ages of 11 and 19 will be sexually assaulted. Did you know that over 100,000 abductions could be attempted in the U.S. this year? Well, Dallas Jessup (now 17 years old) was just 13 years old when she learned of those mind-boggling numbers and had to do something. A black belt in martial arts, she decided to create a short video teaching her classmates basic self-defense moves. The small class project got support from girls and women all around the country; attracting press, funds, and even cameos by Lost's Evangeline Lilly and Josh Holloway. Thus, the 45-minute film called Just Yell Fire was born.

The video shows 10 street-fighting techniques that will help you escape an attack or date-rape situation. The film's title comes from the most effective way to get help if you're under attack. That's right – just yell "fire!" It turns out that people tend to think you’re not really in any danger if you simply yell "help!" And, if you yell "rape," people are wary of coming to your aid. But, yelling "fire" is sure to get everybody's attention.