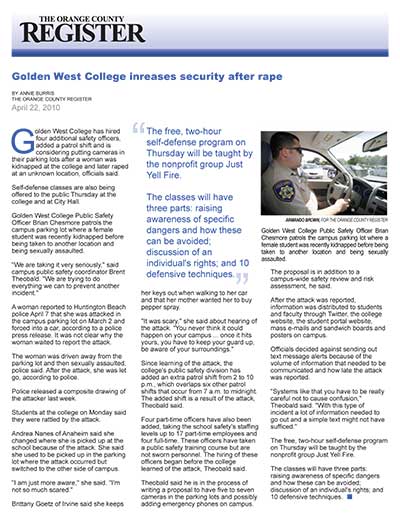 HUNTINGTON BEACH - Golden West College has hired four additional safety officers, added a patrol shift and is considering putting cameras in their parking lots after a woman was kidnapped at the college and later raped at an unknown location, officials said.

Self-defense classes are also being offered to the public Thursday at the college and at City Hall.

"We are taking it very seriously," said campus public safety coordinator Brent Theobald. "We are trying to do everything we can to prevent another incident."

A woman reported to Huntington Beach police April 7 that she was attacked in the campus parking lot on March 2 and forced into a car, according to a police press release. It was not clear why the woman waited to report the attack.

The woman was driven away from the parking lot and then sexually assaulted, police said. After the attack, she was let go, according to police.

Police released a composite drawing of the attacker last week.

Students at the college on Monday said they were rattled by the attack.

Andrea Nanes of Anaheim said she changed where she is picked up at the school because of the attack. She said she used to be picked up in the parking lot where the attack occurred but switched to the other side of campus.

Brittany Goetz of Irvine said she keeps her keys out when walking to her car and that her mother wanted her to buy pepper spray.

"It was scary," she said about hearing of the attack. "You never think it could happen on your campus ... once it hits yours, you have to keep your guard up, be aware of your surroundings."

Since learning of the attack, the college's public safety division has added an extra patrol shift from 2 to 10 p.m., which overlaps six other patrol shifts that occur from 7 a.m. to midnight. The added shift is a result of the attack, Theobald said.

Four part-time officers have also been added, taking the school safety's staffing levels up to 17 part-time employees and four full-time. These officers have taken a public safety training course but are not sworn personnel. The hiring of these officers began before the college learned of the attack, Theobald said.

Theobald said he is in the process of writing a proposal to have five to seven cameras in the parking lots and possibly adding emergency phones on campus. The proposal is in addition to a campus-wide safety review and risk assessment, he said.

After the attack was reported, information was distributed to students and faculty through Twitter, the college website, the student portal website, mass e-mails and sandwich boards and posters on campus.

Officials decided against sending out text message alerts because of the volume of information that needed to be communicated and how late the attack was reported.

"Systems like that you have to be really careful not to cause confusion," Theobald said. "With this type of incident a lot of information needed to go out and a simple text might not have sufficed."

The free, two-hour self-defense program on Thursday will be taught by the nonprofit group Just Yell Fire.

The classes will have three parts: raising awareness of specific dangers and how these can be avoided; discussion of an individual's rights; and 10 defensive techniques.