Golden West and HB team up for safety 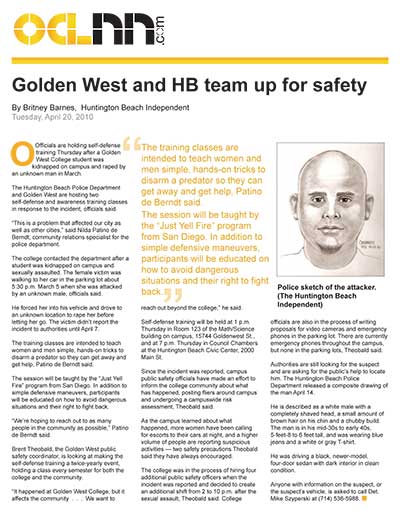 Officials are holding self-defense training Thursday after a Golden West College student was kidnapped on campus and raped by an unknown man in March.

The Huntington Beach Police Department and Golden West are hosting two self-defense and awareness training classes in response to the incident, officials said.

“This is a problem that affected our city as well as other cities,” said Nilda Patino de Berndt, community relations specialist for the police department.

The college contacted the department after a student was kidnapped on campus and sexually assaulted. The female victim was walking to her car in the parking lot about 5:30 p.m. March 5 when she was attacked by an unknown male, officials said.

He forced her into his vehicle and drove to an unknown location to rape her before letting her go. The victim didn’t report the incident to authorities until April 7.

The training classes are intended to teach women and men simple, hands-on tricks to disarm a predator so they can get away and get help, Patino de Berndt said.

The session will be taught by the “Just Yell Fire” program from San Diego. In addition to simple defensive maneuvers, participants will be educated on how to avoid dangerous situations and their right to fight back.

“We’re hoping to reach out to as many people in the community as possible,” Patino de Berndt said.

Brent Theobald, the Golden West public safety coordinator, is looking at making the self-defense training a twice-yearly event, holding a class every semester for both the college and the community.

“It happened at Golden West College, but it affects the community . . . We want to reach out beyond the college,” he said.

Self-defense training will be held at 1 p.m. Thursday in Room 123 of the Math/Science building on campus, 15744 Goldenwest St., and at 7 p.m. Thursday in Council Chambers at the Huntington Beach Civic Center, 2000 Main St.

Since the incident was reported, campus public safety officials have made an effort to inform the college community about what has happened, posting fliers around campus and undergoing a campuswide risk assessment, Theobald said.

As the campus learned about what happened, more women have been calling for escorts to their cars at night, and a higher volume of people are reporting suspicious activities – two safety precautions Theobald said they have always encouraged.

The college was in the process of hiring four additional public safety officers when the incident was reported and decided to create an additional shift from 2 to 10 p.m. after the sexual assault, Theobald said. College officials are also in the process of writing proposals for video cameras and emergency phones in the parking lot. There are currently emergency phones throughout the campus, but none in the parking lots, Theobald said.

Authorities are still looking for the suspect and are asking for the public’s help to locate him. The Huntington Beach Police Department released a composite drawing of the man April 14.

He is described as a white male with a completely shaved head, a small amount of brown hair on his chin and a chubby build. The man is in his mid-30s to early 40s, 5-feet-8 to 6 feet tall, and was wearing blue jeans and a white or gray T-shirt.

He was driving a black, newer-model, four-door sedan with dark interior in clean condition.