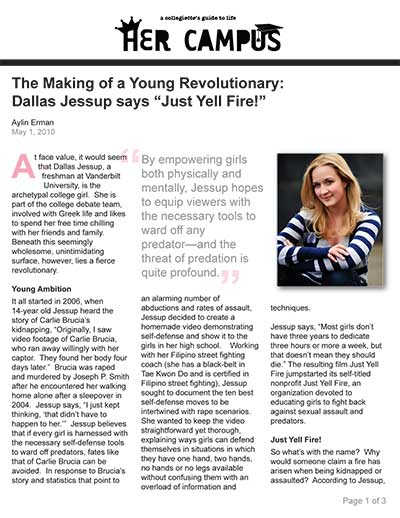 At face value, it would seem that Dallas Jessup, a freshman at Vanderbilt University, is the archetypal college girl.  She is part of the college debate team, involved with Greek life and likes to spend her free time chilling with her friends and family.  Beneath this seemingly wholesome, unintimidating surface, however, lies a fierce revolutionary.

It all started in 2006, when 14-year old Jessup heard the story of Carlie Brucia’s kidnapping, “Originally, I saw video footage of Carlie Brucia, who ran away willingly with her captor.  They found her body four days later.”  Brucia was raped and murdered by Joseph P. Smith after he encountered her walking home alone after a sleepover in 2004.  Jessup says, “I just kept thinking, ‘that didn’t have to happen to her.’”  Jessup believes that if every girl is harnessed with the necessary self-defense tools to ward off predators, fates like that of Carlie Brucia can be avoided.  In response to Brucia’s story and statistics that point to an alarming number of abductions and rates of assault, Jessup decided to create a homemade video demonstrating self-defense and show it to the girls in her high school.    Working with her Pilipino street fighting coach (she has a black-belt in Tao Kwon Do and is certified in Pilipino street fighting), Jessup sought to document the ten best self-defense moves to be intertwined with rape scenarios.  She wanted to keep the video straightforward yet thorough, explaining ways girls can defend themselves in situations in which they have one hand, two hands, no hands or no legs available without confusing them with an overload of information and techniques.

Jessup says, “Most girls don’t have three years to dedicate three hours or more a week, but that doesn’t mean they should die.” The resulting film Just Yell Fire jumpstarted its self-titled nonprofit Just Yell Fire, an organization devoted to educating girls to fight back against sexual assault and predators.

So what’s with the name?  Why would someone claim a fire has arisen when being kidnapped or assaulted?  According to Jessup, yelling “Fire!” effectively grabs immediate attention to a situation, whereas yelling anything else oftentimes scares others from coming to help.   The film, however, is more than a manifesto of girls’ physical strength and capacity to get out of a dire situation; it also encourages the emotional aspects of self-defense—respect, knowing one’s rights and speaking up.  The film intersperses critical self-defense techniques that could fend off a captor twice a girl’s size with statements of empowerment made by Jessup and co-star Catherine Wehage.  They outline these sentiments as part of the so-called “Dating Bill of Rights.”  The rights are summed up in quotes made throughout the film, such as “I have the right to change my mind at any time,” “I have the right to fulfill my life with or without a partner,” or “I have the right to have my limits and values respected,” which highlight the comprehensive nature of self-defense, much of which is enhanced by self-confidence.

Tao Kwon Do and Kung Fu, Jessup explains, teaches that there is a time and a place for fighting and that respect for oneself and others go hand-in-hand with fighting.  Jessup says, “Even though they [girls] theoretically know they have rights, they oftentimes forget they have rights.”  By empowering girls both physically and mentally, Jessup hopes to equip viewers with the necessary tools to ward off any predator—and the threat of predation is quite profound.  Jessup paints a very rough, yet compelling, picture of the extent of the threat we’re looking at in terms of numbers, “For every 1 predator who gets caught, there is something along the lines of having 100 abductors who haven’t been caught. And, if we have over 586,000 registered abductors out there, you can kind of get a feel for how scary that is.”  In addition to having put together the film, Jessup travels around the world teaching hands-on self-defense seminars.

In 2008, the Bureau of Justice Statistics in the United States estimated that girls 12-years-old and older experienced 220,000 rapes or sexual assaults. It was also estimated that nearly 18% of women in this country are raped in the course of a lifetime.

According to the Just Yell Fire campaign, there are 114,000 attempts of abduction each year, and teenage girls face a 1 in 4 risk of sexual assault. When she first jumpstarted Just Yell Fire, Jessup aimed her message to girls between the ages of 11 and 19. Jessup explains the significance of this target age group. She says, “They are let out of their parents sight, they question society and their values, and they are getting pressure from all different aspects of life.”

According to Jessup, “They are at the awkward stage where they are looking for acceptance and they think they know everything—they think they are invincible.” While these girls are dealing with their own growing pains, Jessup says, they are also pegged as “weak” by societal standards. All these factors contribute to girls’ sense of disempowerment, fragility, and low self-confidence. With appearances by Lost stars Evangeline Lilly and Josh Holloway, Just Yell Fire sends the message that girls can be strong, assertive, independent and powerful.

While giving speeches and offering seminars around the world to age groups 11 to 19 as well as the college-aged group of 18 to 24, Jessup continues to see the same thing: girls who have passion but don’t know what to do with it. Jessup says, “Every time I go to a presentation, there are at least 5 girls who come up to me saying there are so many things in their communities that they care passionately about. They really wanted to make a difference.” She continues, “Giving speeches across the country and seeing kids who wanted to make a difference, two things stood out: one, they don’t know if they can; and two, they don’t know how to go about doing it.” This is how Jessup’s how-to-guide for inspiring world change came about. Jessup published Young Revolutionaries Who Rock hoping to motivate teens around the world to take initiative with their passions and become a young revolutionary for their respective causes. The book shares the stories of 10 teens who jumpstarted drastic change in their communities and beyond.

The Future of Just Yell Fire

Having traversed the globe influencing teens, Dallas Jessup has inculcated so many with her simple, yet powerful message.  In addition to her numerous awards and distinctions, she has also received positive feedback from her students and viewers.  In one particular instance, a mother of a young girl wrote to Jessup, telling the story of how her daughter watched Just Yell Fire a few months ago, was subsequently attacked in an alley, and used Jessup’s techniques to run away.  On hearing this story, Jessup decided to create the “Just Yell Fire Teen Hero Award.”  Jessup drove up to visit the young girl, present her with the award, and offer her and her friends self-defense training for three hours.  Because of the success and popularity of Jessup’s seminars, she created the “Train the Trainer” program with teachers, coaches, teens, law enforcement, and martial artists to hold self-defense training seminars in their respective communities.  This allows for the involvement of all aspects of the community, not just the young girls themselves, and it helps the message to be spread faster.

As for Dallas Jessup herself, she continues to carry on her Communications and Political Science double major, hoping to go to law school and perhaps become a broadcaster in journalism and PR marketing. She says, “I have aspirations for a career, but for now, it [Just Yell Fire] is my baby and I want to stick with it as long as possible until there comes a time when someone else steps forth.”

To learn more about Dallas Jessup and her initiatives, please visit www.dallasjessup.com, www.justyellfire.com, or www.youngrevolutionarieswhorock.com.