Empowering a Generation of Young Revolutionaries 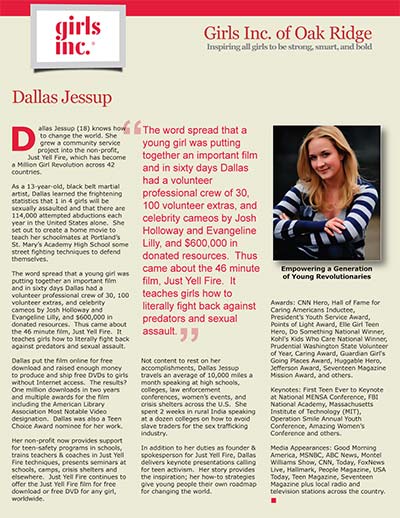 Dallas Jessup (18) knows how to change the world. She grew a community service project into the non-profit, Just Yell Fire, which has become a Million Girl Revolution across 42 countries.

As a 13-year-old, black belt martial artist, Dallas learned the frightening statistics that 1 in 4 girls will be sexually assaulted and that there are 114,000 attempted abductions each year in the United States alone.  She set out to create a home movie to teach her schoolmates at Portland’s St. Mary’s Academy High School some street fighting techniques to defend themselves.

The word spread that a young girl was putting together an important film and in sixty days Dallas had a volunteer professional crew of 30, 100 volunteer extras, and celebrity cameos by Josh Holloway and Evangeline Lilly, and $600,000 in donated resources.  Thus came about the 46 minute film, Just Yell Fire.  It teaches girls how to literally fight back against predators and sexual assault.

Dallas put the film online for free download and raised enough money to produce and ship free DVDs to girls without Internet access.  The results?  One million downloads in two years and multiple awards for the film including the American Library Association Most Notable Video designation.  Dallas was also a Teen Choice Award nominee for her work.

Not content to rest on her accomplishments, Dallas Jessup travels an average of 10,000 miles a month speaking at high schools, colleges, law enforcement conferences, women’s events, and crisis shelters across the U.S.  She spent 2 weeks in rural India speaking at a dozen colleges on how to avoid slave traders for the sex trafficking industry.

In addition to her duties as founder & spokesperson for Just Yell Fire, Dallas delivers keynote presentations calling for teen activism.  Her story provides the inspiration; her how-to strategies give young people their own roadmap for changing the world.