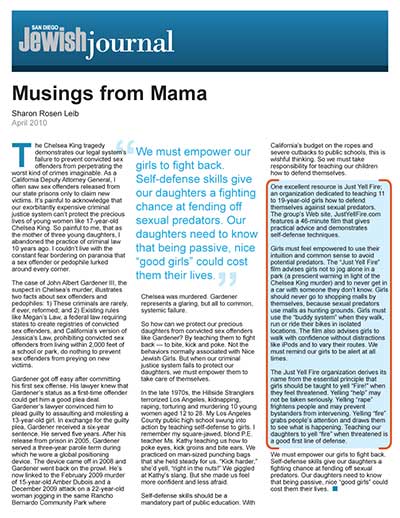 The Chelsea King tragedy demonstrates our legal system’s failure to prevent convicted sex offenders from perpetrating the worst kind of crimes imaginable. As a California Deputy Attorney General, I often saw sex offenders released from our state prisons only to claim new victims. It’s painful to acknowledge that our exorbitantly expensive criminal justice system can’t protect the precious lives of young women like 17-year-old Chelsea King. So painful to me, that as the mother of three young daughters, I abandoned the practice of criminal law 10 years ago. I couldn’t live with the constant fear bordering on paranoia that a sex offender or pedophile lurked around every corner.

Gardener got off easy after committing his first sex offense. His lawyer knew that Gardener’s status as a first-time offender could get him a good plea deal. Gardener’s lawyer convinced him to plead guilty to assaulting and molesting a 13-year-old girl. In exchange for the guilty plea, Gardener received a six-year sentence. He served five years. After his release from prison in 2005, Gardener served a three-year parole term during which he wore a global positioning device. The device came off in 2008 and Gardener went back on the prowl. He’s now linked to the February 2009 murder of 15-year-old Amber Dubois and a December 2009 attack on a 22-year-old woman jogging in the same Rancho Bernardo Community Park where Chelsea was murdered. Gardener represents a glaring, but all to common, systemic failure.

So how can we protect our precious daughters from convicted sex offenders like Gardener? By teaching them to fight back – to bite, kick and poke. Not the behaviors normally associated with Nice Jewish Girls. But when our criminal justice system fails to protect our daughters, we must empower them to take care of themselves.

In the late 1970s, the Hillside Stranglers terrorized Los Angeles, kidnapping, raping, torturing and murdering 10 young women aged 12 to 28. My Los Angeles County public high school swung into action by teaching self-defense to girls. I remember my square-jawed, blond P.E. teacher Ms. Kathy teaching us how to poke eyes, kick groins and bite ears. We practiced on man-sized punching bags that she held steady for us. “Kick harder,” she’d yell, “right in the nuts!” We giggled at Kathy’s slang. But she made us feel more confident and less afraid.

Self-defense skills should be a mandatory part of public education. With California’s budget on the ropes and severe cutbacks to public schools, this is wishful thinking. So we must take responsibility for teaching our children how to defend themselves.

One excellent resource is Just Yell Fire; an organization dedicated to teaching 11 to 19-year-old girls how to defend themselves against sexual predators. The group’s Web site, JustYellFire.com features a 46-minute film that gives practical advice and demonstrates self-defense techniques.

Girls must feel empowered to use their intuition and common sense to avoid potential predators. The “Just Yell Fire” film advises girls not to jog alone in a park (a prescient warning in light of the Chelsea King murder) and to never get in a car with someone they don’t know. Girls should never go to shopping malls by themselves, because sexual predators use malls as hunting grounds. Girls must use the “buddy system” when they walk, run or ride their bikes in isolated locations. The film also advises girls to walk with confidence without distractions like iPods and to vary their routes. We must remind our girls to be alert at all times.

The Just Yell Fire organization derives its name from the essential principle that girls should be taught to yell “Fire!” when they feel threatened. Yelling “help” may not be taken seriously. Yelling “rape” frightens people and may prevent bystanders from intervening. Yelling “fire” grabs people’s attention and draws them to see what is happening. Teaching our daughters to yell “fire” when threatened is a good first line of defense.

We must empower our girls to fight back. Self-defense skills give our daughters a fighting chance at fending off sexual predators. Our daughters need to know that being passive, nice “good girls” could cost them their lives.