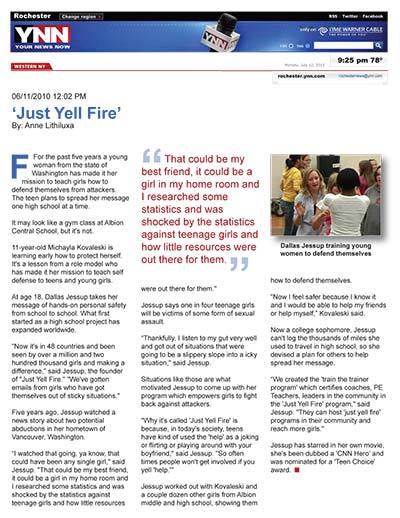 For the past five years a young woman from the state of Washington has made it her mission to teach girls how to defend themselves from attackers. The teen plans to spread her message one high school at a time.

It may look like a gym class at Albion Central School, but it's not.

11-year-old Michayla Kovaleski is learning early how to protect herself. It's a lesson from a role model who has made it her mission to teach self defense to teens and young girls.

At age 18, Dallas Jessup takes her message of hands-on personal safety from school to school. What first started as a high school project has expanded worldwide.

"Now it's in 48 countries and been seen by over a million and two hundred thousand girls and making a difference," said Jessup, the founder of "Just Yell Fire." "We've gotten emails from girls who have got themselves out of sticky situations."

Five years ago, Jessup watched a news story about two potential abductions in her hometown of Vancouver, Washington.

“I watched that going, ya know, that could have been any single girl," said Jessup. "That could be my best friend, it could be a girl in my home room and I researched some statistics and was shocked by the statistics against teenage girls and how little resources were out there for them."

Jessup says one in four teenage girls will be victims of some form of sexual assault.

“Thankfully, I listen to my gut very well and got out of situations that were going to be a slippery slope into a icky situation," said Jessup.

Situations like those are what motivated Jessup to come up with her program which empowers girls to fight back against attackers.

"Why it's called 'Just Yell Fire' is because, in today's society, teens have kind of used the 'help' as a joking or flirting or playing around with your boyfriend," said Jessup. "So often times people won't get involved if you yell 'help.'"

Jessup worked out with Kovaleski and a couple dozen other girls from Albion middle and high school, showing them how to defend themselves.

"Now I feel safer because I know it and I would be able to help my friends or help myself,” Kovaleski said.

Now a college sophomore, Jessup can't log the thousands of miles she used to travel in high school, so she devised a plan for others to help spread her message.

“We created the 'train the trainer program' which certifies coaches, PE Teachers, leaders in the community in the 'Just Yell Fire' program," said Jessup. "They can host 'just yell fire' programs in their community and reach more girls."

Jessup has starred in her own movie, she's been dubbed a 'CNN Hero' and was nominated for a 'Teen Choice' award.