Martial artist, 18, shows other girls how to avoid becoming victims 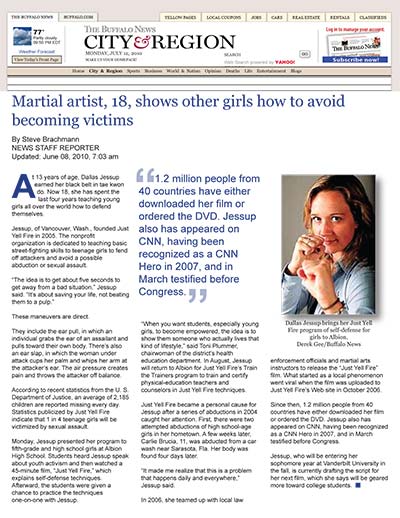 At 13 years of age, Dallas Jessup earned her black belt in tae kwon do. Now 18, she has spent the last four years teaching young girls all over the world how to defend themselves.

Jessup, of Vancouver, Wash., founded Just Yell Fire in 2005. The nonprofit organization is dedicated to teaching basic street-fighting skills to teenage girls to fend off attackers and avoid a possible abduction or sexual assault.

“The idea is to get about five seconds to get away from a bad situation,” Jessup said. “It’s about saving your life, not beating them to a pulp.”

These maneuvers are direct.

They include the ear pull, in which an individual grabs the ear of an assailant and pulls toward their own body. There’s also an ear slap, in which the woman under attack cups her palm and whips her arm at the attacker’s ear. The air pressure creates pain and throws the attacker off balance.

According to recent statistics from the U. S. Department of Justice, an average of 2,185 children are reported missing every day. Statistics publicized by Just Yell Fire indicate that 1 in 4 teenage girls will be victimized by sexual assault.

Monday, Jessup presented her program to fifth-grade and high school girls at Albion High School. Students heard Jessup speak about youth activism and then watched a 45-minute film, “Just Yell Fire,” which explains self-defense techniques. Afterward, the students were given a chance to practice the techniques one-on-one with Jessup.

“When you want students, especially young girls, to become empowered, the idea is to show them someone who actually lives that kind of lifestyle,” said Toni Plummer, chairwoman of the district’s health education department. In August, Jessup will return to Albion for Just Yell Fire’s Train the Trainers program to train and certify physical-education teachers and counselors in Just Yell Fire techniques.

Just Yell Fire became a personal cause for Jessup after a series of abductions in 2004 caught her attention. First, there were two attempted abductions of high school-age girls in her hometown. A few weeks later, Carlie Brucia, 11, was abducted from a car wash near Sarasota, Fla. Her body was found four days later.

“It made me realize that this is a problem that happens daily and everywhere,” Jessup said.

In 2006, she teamed up with local law enforcement officials and martial arts instructors to release the “Just Yell Fire” film. What started as a local phenomenon went viral when the film was uploaded to Just Yell Fire’s Web site in October 2006.

Since then, 1.2 million people from 40 countries have either downloaded her film or ordered the DVD. Jessup also has appeared on CNN, having been recognized as a CNN Hero in 2007, and in March testified before Congress.

Jessup, who will be entering her sophomore year at Vanderbilt University in the fall, is currently drafting the script for her next film, which she says will be geared more toward college students.