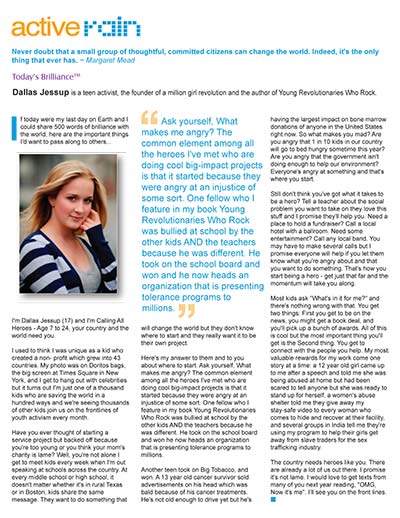 If today were my last day on Earth and I could share 500 words of brilliance with the world, here are the important things I'd want to pass along to others...

I used to think I was unique as a kid who created a non- profit which grew into 43 countries. My photo was on Doritos bags, the big screen at Times Square in New York, and I get to hang out with celebrities but it turns out I'm just one of a thousand kids who are saving the world in a hundred ways and we're seeing thousands of other kids join us on the frontlines of youth activism every month.

Have you ever thought of starting a service project but backed off because you're too young or you think your mom's charity is lame? Well, you're not alone I get to meet kids every week when I'm out speaking at schools across the country. At every middle school or high school, it doesn't matter whether it's in rural Texas or in Boston, kids share the same message. They want to do something that will change the world but they don't know where to start and they really want it to be their own project.

Here's my answer to them and to you about where to start. Ask yourself, What makes me angry? The common element among all the heroes I've met who are doing cool big-impact projects is that it started because they were angry at an injustice of some sort. One fellow who I feature in my book Young Revolutionaries Who Rock was bullied at school by the other kids AND the teachers because he was different. He took on the school board and won he now heads an organization that is presenting tolerance programs to millions.

Another teen took on Big Tobacco, and won. A 13 year old cancer survivor sold advertisements on his head which was bald because of his cancer treatments. He's not old enough to drive yet but he's having the largest impact on bone marrow donations of anyone in the United States right now. So what makes you mad? Are you angry that 1 in 10 kids in our country will go to bed hungry sometime this year? Are you angry that the government isn't doing enough to help our environment? Everyone's angry at something and that's where you start.

Still don't think you've got what it takes to be a hero? Tell a teacher about the social problem you want to take on they love this stuff and I promise they'll help you. Need a place to hold a fundraiser? Call a local hotel with a ballroom. Need some entertainment? Call any local band. You may have to make several calls but I promise everyone will help if you let them know what you're angry about and that you want to do something. That's how you start being a hero - get just that far and the momentum will take you along.

Most kids ask "What's in it for me?" and there's nothing wrong with that. You get two things: First you get to be on the news, you might get a book deal, and you'll pick up a bunch of awards. All of this is cool but the most important thing you'll get is the Second thing. You get to connect with the people you help. My most valuable rewards for my work come one story at a time: a 12 year old girl came up to me after a speech and told me she was being abused at home but had been scared to tell anyone but she was ready to stand up for herself, a women's abuse shelter told me they give away my stay-safe video to every woman who comes to hide and recover at their facility, and several groups in India tell me they're using my program to help their girls get away from slave traders for the sex trafficking industry.

The country needs heroes like you. There are already a lot of us out there. I promise it's not lame. I would love to get texts from many of you next year reading, "OMG, Now it's me". I'll see you on the front lines.