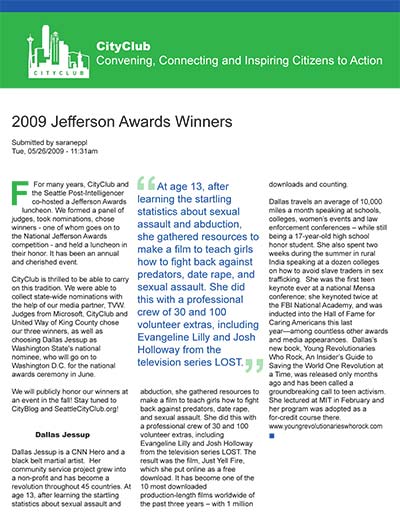 For many years, CityClub and the Seattle Post-Intelligencer co-hosted a Jefferson Awards luncheon. We formed a panel of judges, took nominations, chose winners - one of whom goes on to the National Jefferson Awards competition - and held a luncheon in their honor. It has been an annual and cherished event.

CityClub is thrilled to be able to carry on this tradition. We were able to collect state-wide nominations with the help of our media partner, TVW. Judges from Microsoft, CityClub and United Way of King County chose our three winners, as well as choosing Dallas Jessup as Washington State's national nominee, who will go on to Washington D.C. for the national awards ceremony in June.

We will publicly honor our winners at an event in the fall! Stay tuned to CityBlog and SeattleCityClub.org!

Dallas Jessup is a CNN Hero and a black belt martial artist.  Her community service project grew into a non-profit and has become a revolution throughout 45 countries. At age 13, after learning the startling statistics about sexual assault and abduction, she gathered resources to make a film to teach girls how to fight back against predators, date rape, and sexual assault. She did this with a professional crew of 30 and 100 volunteer extras, including Evangeline Lilly and Josh Holloway from the television series LOST. The result was the film, Just Yell Fire, which she put online as a free download. It has become one of the 10 most downloaded production-length films worldwide of the past three years – with 1 million downloads and counting.

Dallas travels an average of 10,000 miles a month speaking at schools, colleges, women’s events and law enforcement conferences – while still being a 17-year-old high school honor student. She also spent two weeks during the summer in rural India speaking at a dozen colleges on how to avoid slave traders in sex trafficking.  She was the first teen keynote ever at a national Mensa conference; she keynoted twice at the FBI National Academy, and was inducted into the Hall of Fame for Caring Americans this last year—among countless other awards and media appearances.  Dallas’s new book, Young Revolutionaries Who Rock, An Insider’s Guide to Saving the World One Revolution at a Time, was released only months ago and has been called a groundbreaking call to teen activism. She lectured at MIT in February and her program was adopted as a for-credit course there.  www.youngrevolutionarieswhorock.com