Get Fired Up for Just Yell Fire 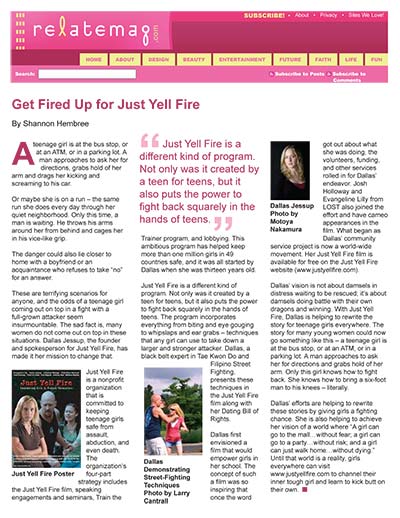 A teenage girl is at the bus stop, or at an ATM, or in a parking lot. A man approaches to ask her for directions, grabs hold of her arm and drags her kicking and screaming to his car.

Or maybe she is on a run – the same run she does every day through her quiet neighborhood. Only this time, a man is waiting. He throws his arms around her from behind and cages her in his vice-like grip.

The danger could also lie closer to home with a boyfriend or an acquaintance who refuses to take “no” for an answer.

These are terrifying scenarios for anyone, and the odds of a teenage girl coming out on top in a fight with a full-grown attacker seem insurmountable. The sad fact is, many women do not come out on top in these situations. Dallas Jessup, the founder and spokesperson for Just Yell Fire, has made it her mission to change that.

Just Yell Fire is a nonprofit organization that is committed to keeping teenage girls safe from assault, abduction, and even death. The organization’s four-part strategy includes the Just Yell Fire film, speaking engagements and seminars, Train the Trainer program, and lobbying. This ambitious program has helped keep more than one million girls in 49 countries safe, and it was all started by Dallas when she was thirteen years old.

Just Yell Fire is a different kind of program. Not only was it created by a teen for teens, but it also puts the power to fight back squarely in the hands of teens. The program incorporates everything from biting and eye gouging to whipslaps and ear grabs – techniques that any girl can use to take down a larger and stronger attacker. Dallas, a black belt expert in Tae Kwon Do and Filipino Street Fighting, presents these techniques in the Just Yell Fire film along with her Dating Bill of Rights.

Dallas first envisioned a film that would empower girls in her school. The concept of such a film was so inspiring that once the word got out about what she was doing, the volunteers, funding, and other services rolled in for Dallas’ endeavor. Josh Holloway and Evangeline Lilly from LOST also joined the effort and have cameo appearances in the film. What began as Dallas’ community service project is now a world-wide movement. Her Just Yell Fire film is available for free on the Just Yell Fire website (www.justyellfire.com).

Dallas’ vision is not about damsels in distress waiting to be rescued; it’s about damsels doing battle with their own dragons and winning. With Just Yell Fire, Dallas is helping to rewrite the story for teenage girls everywhere. The story for many young women could now go something like this – a teenage girl is at the bus stop, or at an ATM, or in a parking lot. A man approaches to ask her for directions and grabs hold of her arm. Only this girl knows how to fight back. She knows how to bring a six-foot man to his knees – literally.

Dallas’ efforts are helping to rewrite these stories by giving girls a fighting chance. She is also helping to achieve her vision of a world where “A girl can go to the mall…without fear; a girl can go to a party…without risk; and a girl can just walk home…without dying.” Until that world is a reality, girls everywhere can visit www.justyellfire.com to channel their inner tough girl and learn to kick butt on their own.