OR program to teach ways to prevent sexual assault 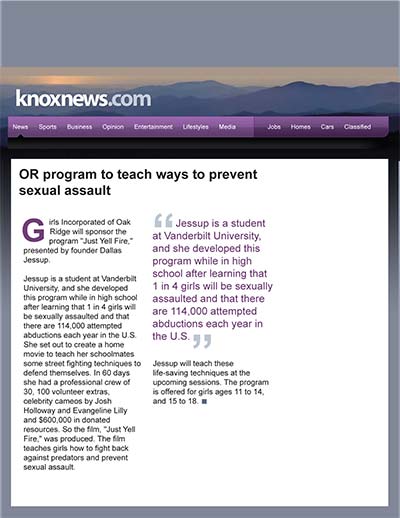 Jessup is a student at Vanderbilt University, and she developed this program while in high school after learning that 1 in 4 girls will be sexually assaulted and that there are 114,000 attempted abductions each year in the U.S. She set out to create a home movie to teach her schoolmates some street fighting techniques to defend themselves. In 60 days she had a professional crew of 30, 100 volunteer extras, celebrity cameos by Josh Holloway and Evangeline Lilly and $600,000 in donated resources. So the film, "Just Yell Fire," was produced. The film teaches girls how to fight back against predators and prevent sexual assault.

Jessup will teach these life-saving techniques at the upcoming sessions. The program is offered for girls ages 11 to 14, and 15 to 18.