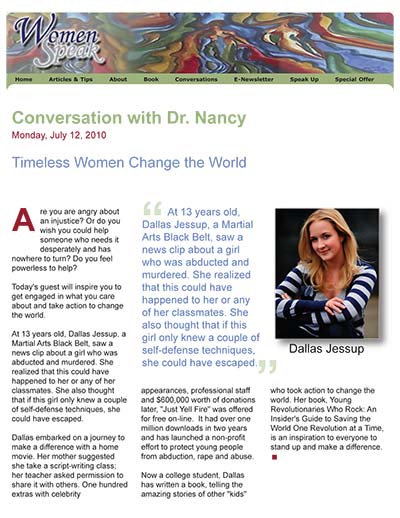 Are you are angry about an injustice?

Or do you wish you could help someone who needs it desperately and has nowhere to turn? Do you feel powerless to help?

Today's guest will inspire you to get engaged in what you care about and take action to change the world.

At 13 years old, Dallas Jessup, a Martial Arts Black Belt, saw a news clip about a girl who was abducted and murdered. She realized that this could have happened to her or any of her classmates. She also thought that if this girl only knew a couple of self-defense techniques, she could have escaped.

Dallas embarked on a journey to make a difference with a home movie. Her mother suggested she take a script-writing class; her teacher asked permission to share it with others. One hundred extras with celebrity appearances, professional staff and $600,000 worth of donations later, "Just Yell Fire" was offered for free on-line. It had over one million downloads in two years and has launched a non-profit effort to protect young people from abduction, rape and abuse.

Now a college student, Dallas has written a book, telling the amazing stories of other "kids" who took action to change the world. Her book, Young Revolutionaries Who Rock: An Insider's Guide to Saving the World One Revolution at a Time, is an inspiration to everyone to stand up and make a difference.