Spotted by Spygirl - Girl Takes on the World 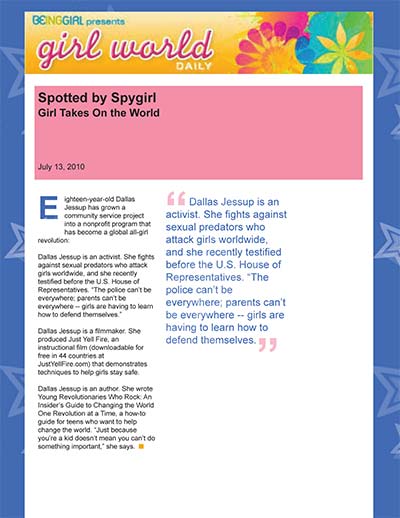 Eighteen-year-old Dallas Jessup has grown a community service project into a nonprofit program that has become a global all-girl revolution:

Dallas Jessup is an activist. She fights against sexual predators who attack girls worldwide, and she recently testified before the U.S. House of Representatives. “The police can’t be everywhere; parents can’t be everywhere -- girls are having to learn how to defend themselves.”

Dallas Jessup is a filmmaker. She produced Just Yell Fire, an instructional film (downloadable for free in 44 countries at JustYellFire.com) that demonstrates techniques to help girls stay safe.

Dallas Jessup is an author. She wrote Young Revolutionaries Who Rock: An Insider’s Guide to Changing the World One Revolution at a Time, a how-to guide for teens who want to help change the world. “Just because you’re a kid doesn’t mean you can’t do something important,” she says.