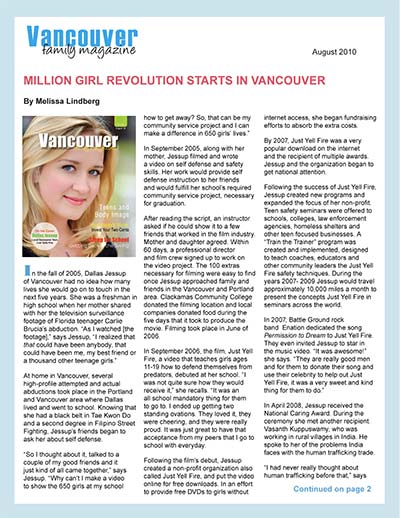 In the fall of 2005, Dallas Jessup of Vancouver had no idea how many lives she would go on to touch in the next five years. She was a freshman in high school when her mother shared with her the television surveillance footage of Florida teenager Carlie Brucia’s abduction. “As I watched [the footage],” says Jessup, “I realized that that could have been anybody, that could have been me, my best friend or a thousand other teenage girls.”

At home in Vancouver, several high-profile attempted and actual abductions took place in the Portland and Vancouver area where Dallas lived and went to school. Knowing that she had a black belt in Tae Kwon Do and a second degree in Filipino Street Fighting, Jessup’s friends began to ask her about self defense.

“So I thought about it, talked to a couple of my good friends and it just kind of all came together,” says Jessup. “Why can’t I make a video to show the 650 girls at my school how to get away? So, that can be my community service project and I can make a difference in 650 girls’ lives.”

In September 2005, along with her mother, Jessup filmed and wrote a video on self defense and safety skills. Her work would provide self defense instruction to her friends and would fulfill her school’s required community service project, necessary for graduation.

After reading the script, an instructor asked if he could show it to a few friends that worked in the film industry. Mother and daughter agreed. Within 60 days, a professional director and film crew signed up to work on the video project. The 100 extras necessary for filming were easy to find once Jessup approached family and friends in the Vancouver and Portland area. Clackamas Community College donated the filming location and local companies donated food during the five days that it took to produce the movie. Filming took place in June of 2006.

In September 2006, the film, Just Yell Fire, a video that teaches girls ages 11-19 how to defend themselves from predators, debuted at her school. “I was not quite sure how they would receive it,” she recalls. “It was an all school mandatory thing for them to go to. I ended up getting two standing ovations. They loved it, they were cheering, and they were really proud. It was just great to have that acceptance from my peers that I go to school with everyday.

Following the film’s debut, Jessup created a non-profit organization also called Just Yell Fire, and put the video online for free downloads. In an effort to provide free DVDs to girls without internet access, she began fundraising efforts to absorb the extra costs.

By 2007, Just Yell Fire was a very popular download on the internet and the recipient of multiple awards. Jessup and the organization began to get national attention.

Following the success of Just Yell Fire, Jessup created new programs and expanded the focus of her non-profit. Teen safety seminars were offered to schools, colleges, law enforcement agencies, homeless shelters and other teen focused businesses. A “Train the Trainer” program was created and implemented, designed to teach coaches, educators and other community leaders the Just Yell Fire safety techniques. During the years 2007- 2009 Jessup would travel approximately 10,000 miles a month to present the concepts Just Yell Fire in seminars across the world.

In 2007, Battle Ground rock band Enation dedicated the song Permission to Dream to Just Yell Fire. They even invited Jessup to star in the music video. “It was awesome!” she says. “They are really good men and for them to donate their song and use their celebrity to help out Just Yell Fire, it was a very sweet and kind thing for them to do.”

In April 2008, Jessup received the National Caring Award. During the ceremony she met another recipient. Vasanth Kuppuswamy, who was working in rural villages in India. He spoke to her of the problems India faces with the human trafficking trade.

“I had never really thought about human trafficking before that,” says Jessup. When Kuppuswamy asked her to come to India and teach the young girls how to defend themselves, she agreed.

Jessup and Kuppuswamy toured 12 high schools and colleges with audiences ranging from 200 to 2,000 members. When necessary, Kuppuswamy assisted Jessup with the language barrier.

“The presentations were a lot different from the United Stales because these girls did not even realize the problem was out there,” says Jessup. “The villages were so small that they had no Idea what was going on outside of their village.

She taught them the skills necessary to light back if someone tried to abduct them into human slavery.

“Despite the cultural deferences, and the different situations girls face, defending yourself is still important no matter where you are in the world,” says Jessup.

In 2008, Jessup was approached by a publishing company wanting her to write a book about herself and Just Yell Fire. She turned the offer down. “I told the publisher that I did not want to write that book because I did not think It was beneficial to my audience,” she says. “Everything, most everything, that is necessary to know about what I do Is on the website, people have already read it, they hear it all time, what kids need is a ‘how-to’ guide book. I saw that there was a need for this book, through all the presentations I do. There are anywhere from 2-10 girls who come up to me after, saying that they want to help the elderly, homeless animals, help feed the hungry, etc. They want to make a difference and if they believe they can make a difference, everyone can.” The publisher agreed to have her write a how-to book for youth activism, later entitled Young Revolutionaries Who Rock, published in 2009. It contains solid advice, examples of different youth activists, different causes and routes that teens can take to get involved and change the world.

“Most kids want to make a difference but they don’t believe they can, and kids are worried about being embarrassed so they want to make sure they know how to get from point A to point B without embarrassment,” says Jessup. That’s what this book is there to show them, how to pick a cause and how to follow through with it.

In March 2010, Jessup testified in front of the U.S. House of Representatives’ Tom Lantos Commission on Human Rights. She was speaking on behalf of Just Yell Fire; to put a stop to predators and modern day slave traders and to educate the young women ages 11-19 about how to defend themselves.

She explained that the Just Yell Fire solution to this problem was to empower the young women of the world through self defense skills “It is the teenage girls on the front lines of human trafficking who becomes the hero, who will put the end to human trafficking in this generation,” says Jessup.

She offered a realistic solution that would include a 5-hour training course in self defense, danger avoidance and get-away skills that would be offered to each girl, every year of attendance in high school. She explained that most teenage girls attend high school and this would provide the most effective way to reach the largest majority of young women and save the most lives.

Shortly after her appearance before the Congressional Committee, two San Diego teenagers were abducted and killed. Shortly afterwards, California senator Christine Kehoe contacted Just Yell Fire for information about their program, including Jessup’s testimony at the Congressional Committee, and used it to write a bill. Senate Bill 1290 would allow self defense training to become a mandatory part of the standard physical education program for students in grade 7-12. “The bill has already passed the first two levels to make self defense mandatory in every school from seventh grade to the senior year in California,” explains Maggie Jessup, Dallas’s mother. “Every school has safety week every year. The way many schools are doing it is to have the girls watch the film in health class and then that week in P.E., they learn the moves.”

There is no doubt that Jessup is changing the world. Her program, Just Yell Fire, is now offered as a credit course at MIT. Just Yell Fire spans 45 countries. With over 1,200,000 downloads and ship-outs of the video, the non-profit agency still offers the free download and DVDs today, and proves true its tagline, The Million Girl Revolution.

“The best part of my job is definitely the girls,” Jessup says. “After a presentation, girls know how to fight back, they are excited, cheering and clapping which means there are less girls out there to become victims.”