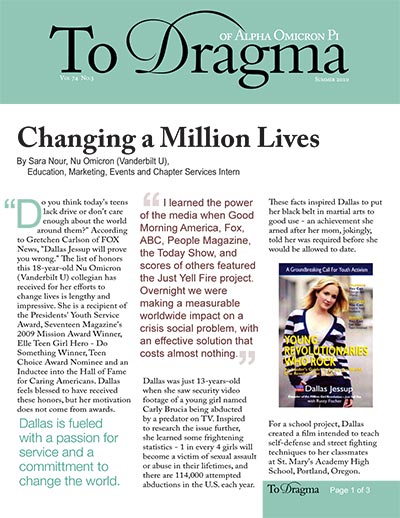 "Do you think today's teens lack drive or don't care enough about the world around them?" According to Gretchen Carlson of FOX News, "Dallas Jessup will prove you wrong." the list of honors this 18-year-old Nu Omicron (Vanderbilt U) collegian has received for her efforts to change lives is lengthy and impressive. She is a recipient of the Presidents' Youth Service Award, Seventeen Magazine's 2009 Mission Award Winner, Elle Teen Girl Hero - Do Something Winner, Teen Choice Award Nominee and an Inductee into the Hall of Fame for Caring Americans. Dallas feels blessed to have received these honors, but her motivation does not come from awards.

Dallas was just 13-years-old when she saw security video footage of a young girl named Carly Brucia being abducted by a predator on TV. Inspired to research the issue further, she learned some frightening statistics - 1 in every 4 girls will become a victim of sexual assault or abuse in their lifetimes, and there are 114,000 attempted abductions in the U.S. each year. These facts inspired Dallas to put her black belt in martial arts to good use - an achievement she arned after her mom, jokingly, told her was required before she would be allowed to date.

Using the tools that she learned from martial arts, Dallas created a home video to empower young girls to fight back. As word spread, volunteers and money started pouring in along with endorsements from celebrities such as Josh Holloway and Evangeline Lilly of ABC's "LOST." Her 46-minute film 'Just Yell Fire" quickly became one of the 10 most downloaded production length films worldwide in 2007. At completion, she was just 14-years-old.

By 15, Dallas had expanded her Just Yell Fire service project into a non-profit organization that has empowered a million girl revolution in 45 countries. Dubbed by many "America's Most Inspring Teen Keynote" speaker, she focuses on educating and training young women, parents, teachers, coaches and others about sexual assault and abduction. Last year, at 17, Dallas published her first book, Young Revolutionaries Who Rock which highlights what inspired her and nine other teens who are attempting to save the world one revolution at a time. The book has been praised for its groundbreaking call to help ordinary teenagers find their passions.

Dallas has travelled all over the globe, averaging 10,000 miles a month, as a motivational speaker. She has appeared everywhere from Congressional hearings to MIT to rural India. Dallas notes, "Always, at least one girl, sometimes six or seven of them, will wait to speak with me after the event and let me know she is an abuse or other assault victim and didn't know that she could make it stop or how to do it until that day. Those direct connections with amazing girls of my own generation motivate me." Dallas's compassion and genuine devotion to service are obvious to anyone who speaks with her about her cause.

So what's next for the CNN Hero and Vanderbilt sophomore? Dallas is currently working on a second film. 'Just Yell Fire: Campus Life" will focus on the unique dangers faced by girls in college," she says. "Dating violence, parking lot dangers, predators breaking into dorms - we'll let girls know they have the right to fight back and exactly how to do it."

Her non-profit organization continues to offer the first Just Yell Fire film for free download or a free DVD to any girl, worldwide. Dallas plans to continue growing the organization and empowering young women globally. Once she graduates from Vanderbilt with a double major in Political Science and Communication Studies, Dallas plans to attend law school. True to form, she aspires to apply that law degree to service. "I hope to be involved in the media at a level that permits me to direct its spotlight onto causes that need attention and resources," she explains.

"I learned the power of the media when Good Morning America, Fox, ABC, People Magazine, the Today Show, and scores of others featured the Just Yell Fire project. Overnight we were making a measurable worldwide impact on a crisis social problem, with an effective solution that costs almost nothing. I really enjoy producing causebased films, and it's always great to hear from girls who read my book and write to say it motivated them to launch a service project. When I find a way to mix all those things together, I'll have found my spot."

Dallas believes that everyone has a bit of a social activism in them. "Certainly that's true of AOII," she says. "We are a caring community of service-oriented girls." The connections that she has with her AOII sisters positively impact her life as an issues advocate. "It's easier to take on impossible social problems when you're a daily part of a community of girls known for speaking out against injustice and backing the plays of sisters who are doing the same."

AOII will always be an important part of Dallas' life. The experiences she has with her Nu Omicron sisters give her valuable tools for the future. "There is a strong focus on personal achievement with impressive role models in every direction, but what impresses me most is the life balance my sisters master. History's highest-impact leaders all seem to master life balance, and that's a valuable lesson in leadership I'm learning from the sisters of AOII."