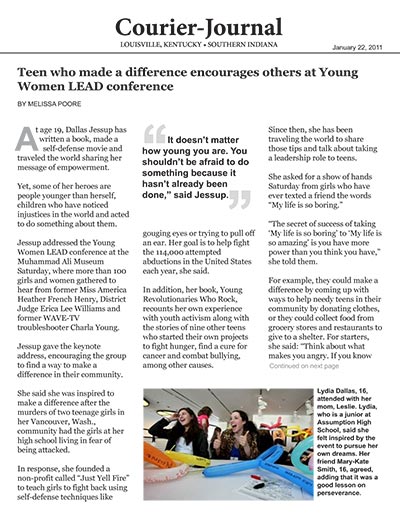 At age 19, Dallas Jessup has written a book, made a self-defense movie and traveled the world sharing her message of empowerment.

Yet, some of her heroes are people younger than herself, children who have noticed injustices in the world and acted to do something about them.

Jessup gave the keynote address, encouraging the group to find a way to make a difference in their community.

She said she was inspired to make a difference after the murders of two teenage girls in her Vancouver, Wash., community had the girls at her high school living in fear of being attacked.

In response, she founded a non-profit called “Just Yell Fire” to teach girls to fight back using self-defense techniques like gouging eyes or trying to pull off an ear. Her goal is to help fight the 114,000 attempted abductions in the United States each year, she said.

In addition, her book, Young Revolutionaries Who Rock, recounts her own experience with youth activism along with the stories of nine other teens who started their own projects to fight hunger, find a cure for cancer and combat bullying, among other causes.

Since then, she has been traveling the world to share those tips and talk about taking a leadership role to teens.

She asked for a show of hands Saturday from girls who have ever texted a friend the words “My life is so boring.”

For example, they could make a difference by coming up with ways to help needy teens in their community by donating clothes, or they could collect food from grocery stores and restaurants to give to a shelter. For starters, she said: “Think about what makes you angry. If you know that, the rest is easy.”

“It doesn’t matter how young you are. You shouldn’t be afraid to do something because it hasn’t already been done,” she told the group.

This was the first time for the event in Louisville. While the conference lasted just four hours, Diane Williams, 16, hopes the message of the event will stick with her as she works to someday become an elementary teacher.

“This has inspired me to pursue my dreams,” she said, adding that she particularly liked Henry’s tips for success, which she paraphrased: “To keep going and look at long term goals and take short term steps to do what I want to accomplish.”

Diane, who is a junior at Southern High School, attended the event with Southern English teacher Jennifer Freeman who brought members from the school’s Future Educators Association.

Other girls attended with their friends or their mothers.

Lydia Dallas, 16, attended with her mom, Leslie. Lydia, who is a junior at Assumption High School, said she felt inspired by the event to pursue her own dreams. Her friend Mary-Kate Smith, 16, agreed, adding that it was a good lesson on perseverance.

“You realize everyone has to go through trials and tribulations to accomplish their dreams,” she said.