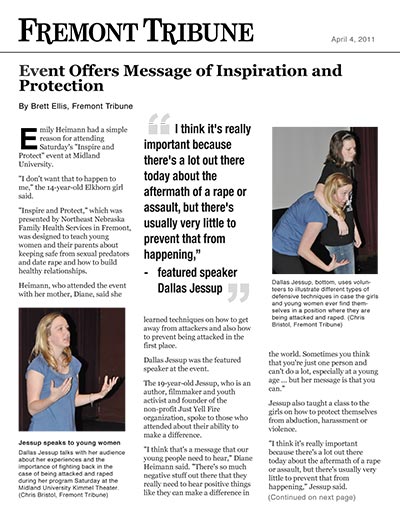 Emily Heimann had a simple reason for attending Saturday's "Inspire and Protect" event at Midland University.

"I don't want that to happen to me," the 14-year-old Elkhorn girl said.

"Inspire and Protect," which was presented by Northeast Nebraska Family Health Services in Fremont, was designed to teach young women and their parents about keeping safe from sexual predators and date rape and how to build healthy relationships.

Heimann, who attended the event with her mother, Diane, said she learned techniques on how to get away from attackers and also how to prevent being attacked in the first place.

Dallas Jessup was the featured speaker at the event.

The 19-year-old Jessup, who is an author, filmmaker and youth activist and founder of the non-profit Just Yell Fire organization, spoke to those who attended about their ability to make a difference.

"I think that's a message that our young people need to hear," Diane Heimann said. "There's so much negative stuff out there that they really need to hear positive things like they can make a difference in the world. Sometimes you think that you're just one person and can't do a lot, especially at a young age ... but her message is that you can."

Jessup also taught a class to the girls on how to protect themselves from abduction, harassment or violence.

"I think it's really important because there's a lot out there today about the aftermath of a rape or assault, but there's usually very little to prevent that from happening," Jessup said.

Jessup hopes those who attended Saturday's event take her message to heart.

"It gives the life of a girl back into her hands," she said. "She can go have fun. You still need to be responsible and need to understand the issues, but it's usually nothing the girl does. It comes on to her for reasons she can't help. It's important to make sure she lives her life without fear and has the skills and knows about it, but isn't afraid to live her life."