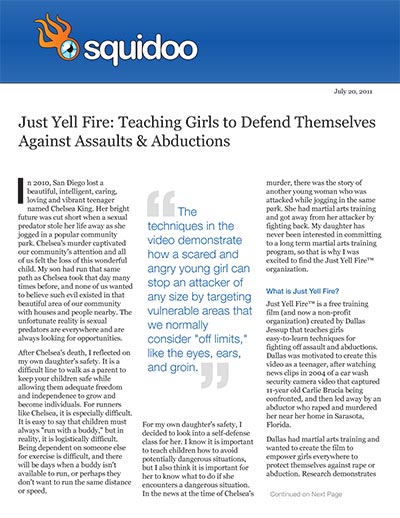 In 2010, San Diego lost a beautiful, intelligent, caring, loving and vibrant teenager named Chelsea King. Her bright future was cut short when a sexual predator stole her life away as she jogged in a popular community park. Chelsea's murder captivated our community's attention and all of us felt the loss of this wonderful child. My son had run that same path as Chelsea took that day many times before, and none of us wanted to believe such evil existed in that beautiful area of our community with houses and people nearby. The unfortunate reality is sexual predators are everywhere and are always looking for opportunities.

After Chelsea's death, I reflected on my own daughter's safety. It is a difficult line to walk as a parent to keep your children safe while allowing them adequate freedom and independence to grow and become individuals. For runners like Chelsea, it is especially difficult. It is easy to say that children must always "run with a buddy," but in reality, it is logistically difficult. Being dependent on someone else for exercise is difficult, and there will be days when a buddy isn't available to run, or perhaps they don't want to run the same distance or speed.

For my own daughter's safety, I decided to look into a self-defense class for her. I know it is important to teach children how to avoid potentially dangerous situations, but I also think it is important for her to know what to do if she encounters a dangerous situation. In the news at the time of Chelsea's murder, there was the story of another young woman who was attacked while jogging in the same park. She had martial arts training and got away from her attacker by fighting back. My daughter has never been interested in committing to a long term martial arts training program, so that is why I was excited to find the Just Yell Fire™ organization.

What is Just Yell Fire™?

Just Yell Fire™ is a free training film (and now a non-profit organization) created by Dallas Jessup that teaches girls easy-to-learn techniques for fighting off assault and abductions. Dallas was motivated to create this video as a teenager, after watching news clips in 2004 of a car wash security camera video that captured 11-year old Carlie Brucia being confronted, and then led away by an abductor who raped and murdered her near her home in Sarasota, Florida.

Dallas had martial arts training and wanted to create the film to empower girls everywhere to protect themselves against rape or abduction. Research demonstrates that a girl has an 85% chance of getting away from an attacker if she fights back. Dallas worked with her martial arts coach, Chad Von Dette, to come up with a few easy-to-learn strategies for getting away from attackers. The techniques in the video demonstrate how a scared and angry young girl can stop an attacker of any size by targeting vulnerable areas that we normally consider "off limits," like the eyes, ears, and groin. They came up with the name Just Yell Fire™ for their video based on the fact that bystanders are more likely to respond to someone yelling "fire!" than they are to "help!" or "rape!"

The Just Yell Fire™ message is that girls and young women have the right to live their lives without fear of assault or abduction. The Just Yell Fire™ mission is to put predators out of business. Teenage girls face a one in four risk of sexual assault, there are 114,000 attempted abductions a year in the U.S., and that's unacceptable. Just Yell Fire's results are impressive. Since 2006 they have empowered more than one million girls in 52 countries with get-away skills and also teaching them their rights with regard to dating and relationships.

The Just Yell Fire Seminar: Made Me Realize How Vulnerable My Daughter Was

My daughter and I watched the free Just Yell Fire™ training film, but I also wanted her to have hands-on practice with their techniques so I contacted Just Yell Fire™ about their seminars. They gave me the list of certified trainers in the San Diego area, and also notified me of a free seminar coming to our area. We were not able to make the free seminar, so I contacted Chad Von Dette and scheduled a training session.

Our training session was two hours long and some of my daughter's friends participated. It was enlightening to watch the girls during our training session. It made me realize just how vulnerable girls are. They were all reluctant, uncomfortable, and timid as Chad asked them to practice poking an eye, slapping an ear, kicking a groin, or biting an arm (using a padded practice mitt). Even though these are natural human and animal survival skills, we train our children at a very young age that these are bad, and that they should not hit, bite or fight back. Additionally they are taught to respect all adults, so we end up suppressing all of the important survival skills that a girl needs if she meets an attacker.

Chad Von Dette spent time telling the girls that it is OK to hurt your attacker, and that you need to hurt your attacker enough to give yourself that chance to run away. He educated them about the vulnerable areas of the body, and how to poke, slap, kick or bite those areas to hurt and distract the attacker long enough so that you get the chance to run away. The girls and I got better at the techniques as we practiced, and I plan to continue practicing these skills with my daughter on a regular basis.

It is important for girls to know their rights, and that it is OK to use their natural survival instincts during an assault. The Just Yell Fire™ video also discusses date rape scenarios and lets young women know that they have the right to resist. This was an invaluable film and seminar for me, my daughter, and her friends, and I highly recommend that you go to their website, download the free movie, and watch, learn and practice Just Yell Fire's awareness and defense techniques!