How One Woman is Saving a Generation from Sexual Violence 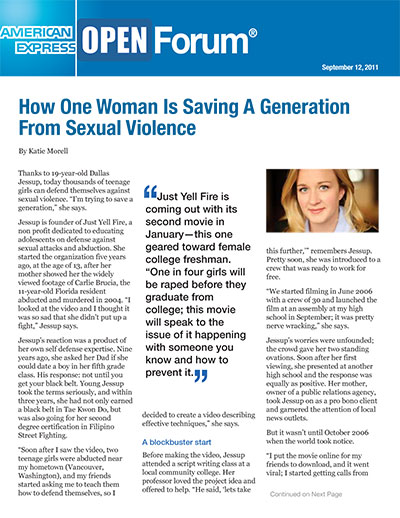 Thanks to 19-year-old Dallas Jessup, today thousands of teenage girls can defend themselves against sexual violence. ďIím trying to save a generation,Ē she says.

Jessup is founder of†Just Yell Fire, a non profit dedicated to educating adolescents on defense against sexual attacks and abduction. She started the organization five years ago, at the age of 13, after her mother showed her the widely viewed footage of Carlie Brucia, the 11-year-old Florida resident abducted and murdered in 2004. ďI looked at the video and I thought it was so sad that she didnít put up a fight,Ē Jessup says.

Jessupís reaction was a product of her own self defense expertise. Nine years ago, she asked her Dad if she could date a boy in her fifth grade class. His response: not until you get your black belt. Young Jessup took the terms seriously, and within three years, she had not only earned a black belt in Tae Kwon Do, but was also going for her second†degree certification in Filipino Street Fighting.

ďSoon after I saw the video, two teenage girls were abducted near my hometown (Vancouver, Washington), and my friends started asking me to teach them how to defend themselves, so I decided to create a video describing effective techniques,Ē she says.

Before making the video, Jessup attended a script writing class at a local community college. Her professor loved the project idea and offered to help. ďHe said, Ďlets take this further,íĒ remembers Jessup. Pretty soon, she was introduced to a crew that was ready to work for free.

ďWe started filming in June 2006 with a crew of 30 and launched the film at an assembly at my high school in September; it was pretty nerve wracking,Ē she says.

Jessupís worries were unfounded; the crowd gave her two standing ovations. Soon after her first viewing, she presented at another high school and the response was equally as positive. Her mother, owner of a public relations agency, took Jessup on as a pro bono client and garnered the attention of local news outlets.

But it wasnít until October 2006 when the world took notice.

ďI put the movie online for my friends to download, and it went viral; I started getting calls from schools asking me to speak on the topic,Ē says Jessup.

With world watching, it was time to make Jessupís efforts official. She launched Just Yell Fire and began traveling all over the country, showing her video and speaking out against teen sexual violence. ďIn high school, I traveled an average of 10,000 miles per month; I only went to school three to four days at week at times,Ē she says, adding that during that time, she was named one of†CNNís 2007 Heroes and has since been featured on†Fox News†and†TODAY.

For the next few years, Jessup and a small team of volunteers worked tirelessly, growing Just Yell Fire and educating teens on violence prevention. About 18 months ago, they began approaching government officials to lobby for a mandate for teaching violence prevention in all school districts.

The effort failed. ďWe received a lot of push back; teacher organizations didnít like to be told what to teach,Ē Jessup says.

Instead, the organization launched†Train the Trainer, a program to teach community members how to train others in self-defense techniques. ďIf more than eight people are interested in being trained, we will go to their location and spend a day certifying them in the Just Yell Fire Program; we work with them and give them presentation materials so they can teach the program to others,Ē she says.

Today, Jessup is a junior at Vanderbilt University in Nashville, Tennessee. While she admits that life as a college student and non-profit founder can be ďa little overwhelmingĒ at times, she is happy to give her time such an important cause. ďI couldnít imagine a better life; I know I am helping girlsí lives and that is a huge motivator; thereís nothing better and receiving a thank you not from a Mother, and I get those often,Ē she says.

Just Yell Fire is coming out with its second movie in Januaryóthis one geared toward female college freshman. ďOne in four girls will be raped before they graduate from college; this movie will speak to the issue of it happening with someone you know and how to prevent it,Ē she says.

What are Jessupís plans for the future?

ďIíd like Just Yell Fire to be established in colleges and I will work hard to achieve that; on the career front, I would love to be a TV morning show producer and help facilitate what is on the air because I would like to help social causes reach the surface,Ē she says.