Do You Have a Daughter? Just Yell Fire 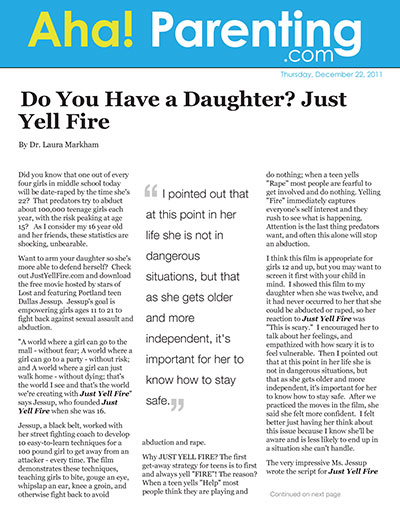 Did you know that one out of every four girls in middle school today will be date-raped by the time she's 22?  That predators try to abduct about 100,000 teenage girls each year, with the risk peaking at age 15?   As I consider my 16 year old and her friends, these statistics are shocking, unbearable.

Want to arm your daughter so she's more able to defend herself?  Check out JustYellFire.com and download the free movie hosted by stars of Lost and featuring Portland teen Dallas Jessup.  Jessup's goal is empowering girls ages 11 to 21 to fight back against sexual assault and abduction.

Jessup, a black belt, worked with her street fighting coach to develop 10 easy-to-learn techniques for a 100 pound girl to get away from an attacker - every time. The film demonstrates these techniques, teaching girls to bite, gouge an eye, whipslap an ear, knee a groin, and otherwise fight back to avoid abduction and rape.

Why JUST YELL FIRE? The first get-away strategy for teens is to first and always yell "FIRE"! The reason?   When a teen yells "Help" most people think they are playing and do nothing; when a teen yells "Rape" most people are fearful to get involved and do nothing. Yelling "Fire" immediately captures everyone's self interest and they rush to see what is happening. Attention is the last thing predators want, and often this alone will stop an abduction.

I think this film is appropriate for girls 12 and up, but you may want to screen it first with your child in mind.  I showed this film to my daughter when she was twelve, and it had never occurred to her that she could be abducted or raped, so her reaction to Just Yell Fire was "This is scary."  I encouraged her to talk about her feelings, and empathized with how scary it is to feel vulnerable.  Then I pointed out that at this point in her life she is not in dangerous situations, but that as she gets older and more independent, it's important for her to know how to stay safe.  After we practiced the moves in the film, she said she felt more confident.  I felt better just having her think about this issue because I know she'll be aware and is less likely to end up in a situation she can't handle.

The very impressive Ms. Jessup wrote the script for Just Yell Fire and organized a professional crew of 30 volunteers to create it--when she was a teenager.  The film not only demonstrates the 10 techniques, but shares a Dating Bill of Rights, and includes stay-safe strategies from law enforcement agencies. Josh Holloway and Evangeline Lilly, stars of television's LOST, also volunteered and appear in the film.