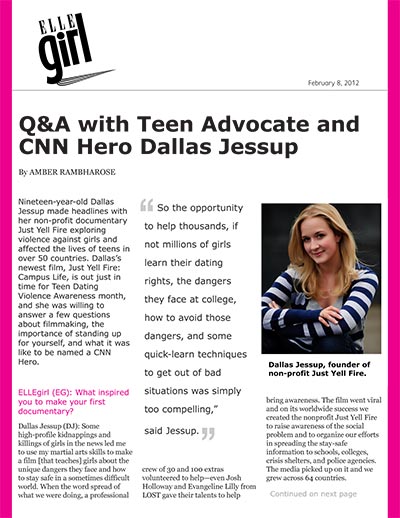 Nineteen-year-old Dallas Jessup made headlines with her non-profit documentary Just Yell Fire exploring violence against girls and affected the lives of teens in over 50 countries. Dallas’s newest film, Just Yell Fire: Campus Life, is out just in time for Teen Dating Violence Awareness month, and she was willing to answer a few questions about filmmaking, the importance of standing up for yourself, and what it was like to be named a CNN Hero.

ELLEgirl (EG): What inspired you to make your first documentary?
Dallas Jessup (DJ): Some high-profile kidnappings and killings of girls in the news led me to use my martial arts skills to make a film [that teaches] girls about the unique dangers they face and how to stay safe in a sometimes difficult world. When the word spread of what we were doing, a professional crew of 30 and 100 extras volunteered to help—even Josh Holloway and Evangeline Lilly from LOST gave their talents to help bring awareness. The film went viral and on its worldwide success we created the nonprofit Just Yell Fire to raise awareness of the social problem and to organize our efforts in spreading the stay-safe information to schools, colleges, crisis shelters, and police agencies. The media picked up on it and we grew across 64 countries.

EG: What brought about this follow-up, Just Yell Fire: Campus Life?
DJ: Girls heading off to college, typically living away from home for the first time, are prepared for the academics but pretty much clueless when it comes to the social and real world side of the experience. They expect their idolized Gossip Girl environment with no hiccups or danger, but the reality is that one in three will experience dating abuse, and few know they have rights—even fewer know how to stand up for those rights.

When more than 1.6 million girls downloaded the first Just Yell Fire film, we knew that an online film, made by girls for girls, could have a big social impact. Also, I’ve found from speaking at schools and colleges around the country that girls listen to someone their own age.

So the opportunity to help thousands, if not millions of girls learn their dating rights, the dangers they face at college, how to avoid those dangers, and some quick-learn techniques to get out of bad situations was simply too compelling. When I shared my new script with director Takefumi Uehara, the MVT Productions people and some financial backers, everyone embraced the idea and the new film was launched. The word got out and more than a dozen entertainment and sports notables also jumped in to do cameos in the film.

EG: What was the filmmaking process like?
DJ: It was one the most exciting thing I’ve ever done. As a scriptwriter I had to create a realistic narrative that would convey our stay-safe messages in a way that would keep the attention of college age girls and write it to fit a less-than-an-hour format. The pressure was on because of the importance of the message and knowing that if it was good enough we could once again connect with and protect millions of girls around the world. It took a full year, writing—and rewriting—after classes, late at night, and when I was on the road for speaking engagements. I had lots of great help on the writing, editing, rewrites, structuring, and all the other elements.

Then I had to put on my executive producer’s hat to gather the resources to turn the script into the film. Maybe the hardest part was making it all happen with almost no money as we’re a nonprofit with very limited funding. But, I was really lucky as we found some experienced actors that readily volunteered with the assistance from a casting agent who also donated her time. The director from the first film stepped up again as well as the MTV Productions people to do the filming. Then we had to deal with the thousand details of arranging locations, wardrobe, equipment, transportation, legal releases, food for the crew and everything else, but somehow it all came together for the filming this summer.

Since then we’ve been in post-production which involves editing immense amounts of film (shoots, reshoots and more reshoots of every scene), adding music and sound effects and all the other behind the scenes things that turn raw footage into a finished film. Now I’m spending lots of time working on publicity, college launches, and scheduling showings and working with the many people who have volunteered to help.

EG: What overall message are you looking for your viewers to take away from the film?
DJ: Girls can, should, and will have a fantastic time at college, but they need to be able to define that experience rather than have someone else define it for them and learn some social and stay-safe basics. They don’t have to become a dating abuse statistic, and they have the power to assert their rights to live a safe and exciting college life. The film is free to view online at justyellfire.org, and we hope everyone will take advantage of it and share the information!

EG: Do you have any advice for teens looking to break into the film industry?
DJ: Our generation is lucky because creative and distribution technology is cheap and readily available. Anyone can be a filmmaker with some simple tools and a YouTube account. I have friends, however, who are going to colleges with strong film programs and others who have jumped into the industry as writers, actors, editors, lighting or camera people, or joining productions in any of a hundred capacities. The important thing is to do something, anything to get started. What I find really cool is that the film industry is an open community anyone can join and people go way out of their way to help you get involved. Just ask.

EG: How can our readers get involved with Just Yell Fire?
DJ: The first thing is to watch one or both films (one is for high school and the other for college) to learn their rights, how to avoid danger, and how to stand up for themselves. Then, it’s a matter of spreading the word. Everyone has a cousin, neighbor, sister, or acquaintance that will be safer if they watch the films. We also have lots of girls in high school who take Just Yell Fire on as a project and show the film to their schoolmates or get their school to adopt the program as an empowerment program for their girls as part of health or physical education class. Girls in college are sharing the film with their dorm mates and sorority sisters and others are working with their colleges to make Just Yell Fire a mandatory part of orientation for freshmen. It’s a cool service project (a great resume item) and you can meaningfully impact the world. Anyone can get in touch with us at [hidden email]. Of course, as a nonprofit we can always use financial help. You can donate on our site using Paypal or Google Checkout, or you can mail a check. No one here makes a salary and the money really does go to pay the expenses involved in making this available to girls at no cost.

EG: What was it like to be named a CNN Hero?
DJ: The recognition was fun and having a camera crew following me around for a couple of days was cool but the biggest value I found was that it exposed Just Yell Fire to CNN’s huge national and international audience. Just Yell Fire is now active in 64 countries and media outlets like CNN helped make that happen. I’m very grateful to them for this result. What was best for me with this and the Teen Choice Award nomination, the DoSomething award, and the rest is you get to meet a lot of people who are taking on crisis social problems and having sometimes a worldwide impact. We share ideas and help each other out. Another Jefferson Award winner invited me to do a speaking tour to a dozen colleges in India and a 13 year old cancer activist inspired me to write my Young Revolutionaries Who Rock book. There are a lot of heroes out there and anyone, at any age, can join the group.

EG: What are your plans for the future?
DJ: Quarterbacking the Just Yell Fire: Campus Life national launch while surviving my junior year at Vanderbilt University, keeping the nonprofit growing, and continuing speaking engagements is my short term goal. After college I’m hoping to either go to business school or get involved in the media in some capacity where I can leverage their massive audiences to cause social change. Interesting opportunities come along when you stay involved so we’ll see what happens over the next year but I like writing, running a nonprofit, public speaking, traveling and of course, filmmaking.