A national program that helps females learn how to avoid and escape dangerous situations is being taught locally. 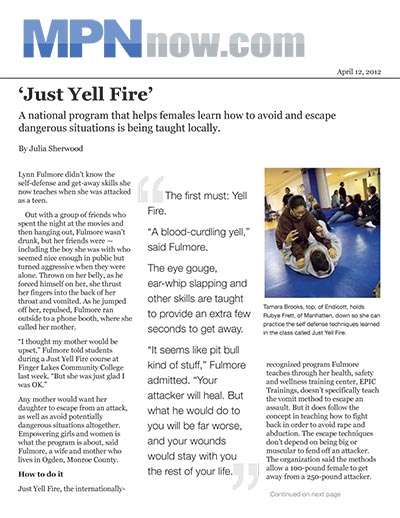 Lynn Fulmore didn’t know the self-defense and get-away skills she now teaches when she was attacked as a teen.

Out with a group of friends who spent the night at the movies and then hanging out, Fulmore wasn’t drunk, but her friends were — including the boy she was with who seemed nice enough in public but turned aggressive when they were alone. Thrown on her belly, as he forced himself on her, she thrust her fingers into the back of her throat and vomited. As he jumped off her, repulsed, Fulmore ran outside to a phone booth, where she called her mother.

“I thought my mother would be upset,” Fulmore told students during a Just Yell Fire course at Finger Lakes Community College last week. “But she was just glad I was OK.”

Any mother would want her daughter to escape from an attack, as well as avoid potentially dangerous situations altogether. Empowering girls and women is what the program is about, said Fulmore, a wife and mother who lives in Ogden, Monroe County.

How to do it
Just Yell Fire, the internationally-recognized program Fulmore teaches through her health, safety and wellness training center, EPIC Trainings, doesn’t specifically teach the vomit method to escape an assault. But it does follow the concept in teaching how to fight back in order to avoid rape and abduction. The escape techniques don’t depend on being big or muscular to fend off an attacker. The organization said the methods allow a 100-pound female to get away from a 250-pound attacker.

“It’s all about leverage, not strength,” Fulmore told the students in the co-ed group at FLCC who practiced the methods.

While none of them left the class with a torn ear or gouged-out eyes, they learned those moves and others to surprise and hurt an attacker to allow a getaway.

Endorsed by the Federal Bureau of Investigation, Just Yell Fire was created in 2006 and is taught at the FBI National Academy and at universities including Massachusetts Institute of Technology.

The first must: Yell fire.

“A blood-curdling yell,” said Fulmore, who teaches the Just Yell Fire program across the state on college campuses, for Girl Scout troops and at private parties.

The eye gouge, ear-whip slapping and other skills are taught to provide an extra few seconds to get away.

“It seems like pit bull kind of stuff,” Fulmore admitted. “Your attacker will heal. But what he would do to you will be far worse, and your wounds would stay with you the rest of your life.”

Personal story
Tabitha Richards is in a steady relationship, and five months ago became a mom. A student at Finger Lakes Community College, the 19-year-old pursuing a degree in human services is doing well. But a traumatic experience she had six years ago will stay with her the rest of her life.

Rather than keep it a secret, Richards said she decided a long time ago she would share openly that she was raped. She won’t allow the experience to destroy her life, said Richards, who wished she had learned the Just Yell Fire techniques before it happened and thinks using them could have prevented it.

The program is taught to girls as young as 11 and includes learning how to avoid potentially dangerous situations as well as techniques to escape attackers.

“I met this kid at the Sauerkraut Festival,” recalled Richards, after the Just Yell Fire class April 5 at FLCC. “We were hanging out and then went to his house.”

“I didn’t know any these techniques then,” she said. “It was a pretty scary situation.”

With people in other parts of the house where she was raped, using the first line of defense taught, “Just Yell Fire,” would likely have been enough to throw off her attacker and allow her escape.

Though her experience is not something she dwells on, said Richards, she hopes sharing it helps others.