This 20-year-old college student makes films to teach girls self-defense so they can protect themselves from sexual violence and abduction. 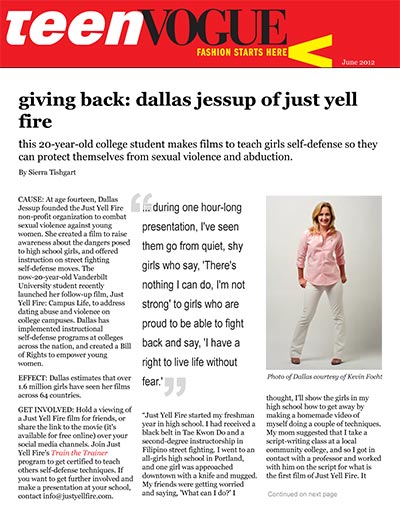 EFFECT: Dallas estimates that over 1.6 million girls have seen her films across 64 countries.

GET INVOLVED: Hold a viewing of a Just Yell Fire film for friends, or share the link to the movie (it's available for free online) over your social media channels. Join Just Yell Fire's Train the Trainer program to get certified to teach others self-defense techniques. If you want to get further involved and make a presentation at your school, contact [hidden email].

"Just Yell Fire started my freshman year in high school. I had received a black belt in Tae Kwon Do and a second-degree instructorship in Filipino street fighting. I went to an all-girls high school in Portland, and one girl was approached downtown with a knife and mugged. My friends were getting worried and saying, 'What can I do?' I thought, I'll show the girls in my high school how to get away by making a homemade video of myself doing a couple of techniques. My mom suggested that I take a script-writing class at a local community college, and so I got in contact with a professor and worked with him on the script for what is the first film of Just Yell Fire. It came out in October 2006, and I showed it to local high schools. We put it online for free so people could download it, and things just went crazy from there."

"My new film, Just Yell Fire: Campus Life, was filmed this past August and is available to watch for free online. The summer before I went to Vanderbilt, I did a presentation at Mississippi State University. I realized that in college, a lot of dangerous situations are more peer-based. It's not like in high school, where it's a mix between peer violence and stranger violence. College is the first time girls have a lot of freedom, and it's easy to let your guard down and think that you're safe on your campus. We're not telling girls what decisions they have to make or what their morals and values should be, but we're telling them that they should know what their limits are and stick to them, no matter what circumstances arise."

"We're also working on a program for colleges; we're writing a manual for girls, and organizing an orientation-type event where schools can show the film, have seminars, and work through the techniques. We also have a Dating Bill of Rights, which is our core manual. Even if you know all the techniques and have an extensive knowledge of every martial arts move out there, if you don't have self-confidence, then you're not going to defend yourself. You have a right to say no and you have the right to be heard."

"I've talked to so many girls that have been raped and they often say, 'I asked for it.' It's really sad to hear, and that is a part of the reason why a lot of girls don't fight back. It's not girls' second nature to instantly fight back, and it's hard to remember that in a situation where someone has violated your rights, you have the right to do so."

"Evangeline Lilly and Josh Holloway contributed to our first film, which was phenomenal. I had a friend whose uncle worked on the set of Lost, and we contacted them. Josh Holloway even said, 'I'll run down Broadway naked if I have to for a cause like this!' For the film, I worked through connections I've made from various awards I've received, and I was able to get great celebrities, like Shay Mitchell from Pretty Little Liars, to contribute."

"The most important thing to know about sexual violence is that it happens at an alarmingly high rate. One in three girls experiences dating violence, and one in four are date raped before they graduate college. I've seen a difference in the girls I've talked to. Even during one hour-long presentation, I've seen them go from quiet, shy girls who say, 'There's nothing I can do, I'm not strong' to girls who are proud to be able to fight back and say, 'I have a right to live life without fear.' A girl recently emailed me to say that a man had approached her and tried to take her away, and she did a couple of my techniques, broke his nose, and got away. Knowing basic techniques can make our generation into one that hopefully stomps out dating violence and abduction."