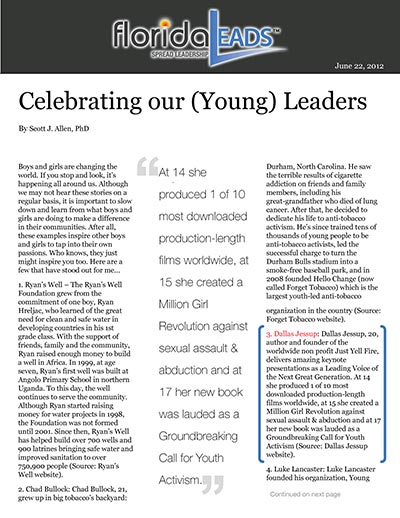 Boys and girls are changing the world. If you stop and look, it’s happening all around us. Although we may not hear these stories on a regular basis, it is important to slow down and learn from what boys and girls are doing to make a difference in their communities. After all, these examples inspire other boys and girls to tap into their own passions. Who knows, they just might inspire you too. Here are a few that have stood out for me…

1. Ryan’s Well – The Ryan’s Well Foundation grew from the commitment of one boy, Ryan Hreljac, who learned of the great need for clean and safe water in developing countries in his 1st grade class. With the support of friends, family and the community, Ryan raised enough money to build a well in Africa. In 1999, at age seven, Ryan’s first well was built at Angolo Primary School in northern Uganda. To this day, the well continues to serve the community. Although Ryan started raising money for water projects in 1998, the Foundation was not formed until 2001. Since then, Ryan’s Well has helped build over 700 wells and 900 latrines bringing safe water and improved sanitation to over 750,900 people (Source: Ryan’s Well website).

2. Chad Bullock: Chad Bullock, 21, grew up in big tobacco’s backyard: Durham, North Carolina. He saw the terrible results of cigarette addiction on friends and family members, including his great-grandfather who died of lung cancer. After that, he decided to dedicate his life to anti-tobacco activism. He’s since trained tens of thousands of young people to be anti-tobacco activists, led the successful charge to turn the Durham Bulls stadium into a smoke-free baseball park, and in 2008 founded Hello Change (now called Forget Tobacco) which is the largest youth-led anti-tobacco
organization in the country (Source: Forget Tobacco website).

3. Dallas Jessup: Dallas Jessup, 20, author and founder of the worldwide non profit Just Yell Fire, delivers amazing keynote presentations as a Leading Voice of the Next Great Generation. At 14 she produced 1 of 10 most downloaded production-length films worldwide, at 15 she created a Million Girl Revolution against sexual assault & abduction and at 17 her new book was lauded as a Groundbreaking Call for Youth Activism (Source: Dallas Jessup website).

4. Luke Lancaster: Luke Lancaster founded his organization, Young Pioneers, at the age of 12 after being continuously bullied at school. Through his experiences, Luke began to notice many others like him, struggling to succeed in life, yet still wanting to make a difference in the world. Inspired to find a solution to the problem, Luke decided to create a youth-led organization whose goal is to “make it cool to care.” (Source: World of Children).

Of course these are just four of the many examples one can view on websites such as World of Children or DoSomething.org. A final point I would like to make is this: If you look at leaders who have made a difference (big and small) in the world there are often two ingredients present. First, they have a healthy disregard for the barriers that face them. In other words, although they may be aware of the obstacles in front of them, they choose to move forward and are often fueled by an intense passion for the cause or movement. In addition, these individuals often think in possibilities and inspire others to do so as well.

Spend some time celebrating the boys and girls who are making a difference. Then, look within and determine your calling. You may just change the world…