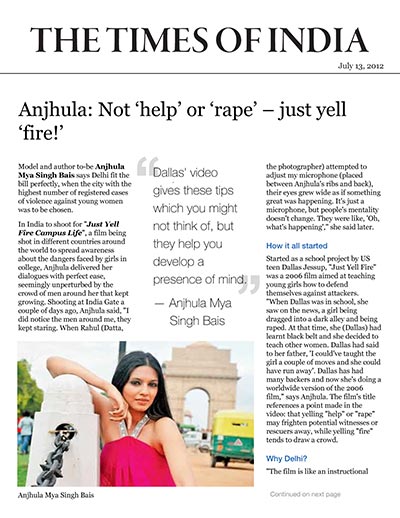 Model and author to-be Anjhula Mya Singh Bais says Delhi fit the bill perfectly, when the city with the highest number of registered cases of violence against young women was to be chosen.

In India to shoot for "Just Yell Fire Campus Life", a film being shot in different countries around the world to spread awareness about the dangers faced by girls in college, Anjhula delivered her dialogues with perfect ease, seemingly unperturbed by the crowd of men around her that kept growing. Shooting at India Gate a couple of days ago, Anjhula said, "I did notice the men around me, they kept staring. When Rahul (Datta, the photographer) attempted to adjust my microphone (placed between Anjhula's ribs and back), their eyes grew wide as if something great was happening. It's just a microphone, but people's mentality doesn't change. They were like, 'Oh, what's happening'," she said later.

How it all started Started as a school project by US teen Dallas Jessup, "Just Yell Fire" was a 2006 film aimed at teaching young girls how to defend themselves against attackers. "When Dallas was in school, she saw on the news, a girl being dragged into a dark alley and being raped. At that time, she (Dallas) had learnt black belt and she decided to teach other women. Dallas had said to her father, 'I could've taught the girl a couple of moves and she could have run away'. Dallas has had many backers and now she's doing a worldwide version of the 2006 film," says Anjhula. The film's title references a point made in the video: that yelling "help" or "rape" may frighten potential witnesses or rescuers away, while yelling "fire" tends to draw a crowd.

Why Delhi? "The film is like an instructional DVD, teaching women simple methods of defence. Two fingers could be used to gouge a man's eyes out, a simple hand movement could help you get away when attacked... So just these swift moves can empower women. You pick up a newspaper, read the headlines every day, it's crazy. Delhi is known as the rape capital of India for a reason," says Anjhula, adding, "The Taj Mahal would have been more iconic to India, but since it didn't fit our schedule and Delhi's rape cases outnumber other cities', this was the perfect location. India Gate is iconic, it is something people associate with Delhi."

My father gifted me pepper spray on my 21st birthday This Lady Sri Ram College graduate says she was a victim herself. "Once, I was meeting a family friend at a hotel in Vasant Kunj. I used to stay in Vasant Vihar, literally five minutes away. They were very tired and were like 'don't mind if we can't drop you off', but I was okay to go on my own. I got into my car, but had two men follow me. They kept following me. I had the presence of mind not to go home because then they'd know where I live. Dallas' video gives these tips which you might not think of, but they help you develop a presence of mind. I was driving around in Vasant Vihar and the guy was like 'Oh, is that Anjhula Singh?' and he thought it would be really funny. I finally ducked into a side street and cut my lights," she says. "On my 21st birthday, my father gifted me pepper spray. He was like, 'You need it, you're in Delhi'," she adds.

High kicks in Indian saris and salwars - possible? Anjhula disagrees when we ask if a sari or a salwar could be restrictive while using these moves for self-defence. "You know, when Dallas came to South India and was teaching the girls there, they were a little shy to kick in the groin, but they opened up eventually. They felt much more confident after learning those techniques. I watched a video of them - they walked with their head held high. Maybe something else might be a little less cumbersome than a salwar, but if you watch the video, not everything is a kick. Your elbow, your fingers, everything come into play. You can grab a person's ear, and just by a trick of turning your hand you can rip the person's ear off. Dallas actually says in the video, 'You keep the ear for DNA evidence'. The point is to hit the person so you have enough time to run away, so even our beautiful women in saris can inflict some serious damage," she says.