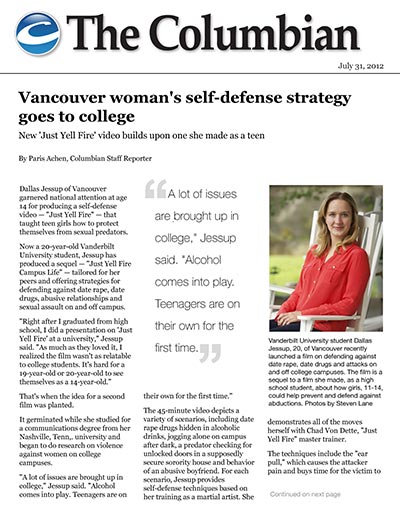 Dallas Jessup of Vancouver garnered national attention at age 14 for producing a self-defense video — "Just Yell Fire" — that taught teen girls how to protect themselves from sexual predators.

Now a 20-year-old Vanderbilt University student, Jessup has produced a sequel — "Just Yell Fire Campus Life" — tailored for her peers and offering strategies for defending against date rape, date drugs, abusive relationships and sexual assault on and off campus.

"Right after I graduated from high school, I did a presentation on 'Just Yell Fire' at a university," Jessup said. "As much as they loved it, I realized the film wasn't as relatable to college students. It's hard for a 19-year-old or 20-year-old to see themselves as a 14-year-old."

That's when the idea for a second film was planted.

It germinated while she studied for a communications degree from her Nashville, Tenn,. university and began to do research on violence against women on college campuses.

"A lot of issues are brought up in college," Jessup said. "Alcohol comes into play. Teenagers are on their own for the first time."

The 45-minute video depicts a variety of scenarios, including date rape drugs hidden in alcoholic drinks, jogging alone on campus after dark, a predator checking for unlocked doors in a supposedly secure sorority house and behavior of an abusive boyfriend. For each scenario, Jessup provides self-defense techniques based on her training as a martial artist. She demonstrates all of the moves herself with Chad Von Dette, "Just Yell Fire" master trainer.

The techniques include the "ear pull," which causes the attacker pain and buys time for the victim to get away. It also allows the victim to gather the attacker's DNA under her fingernails. Whenever in danger, Jessup recommends yelling "fire" as it's more likely to attract attention than "help."

In between each scene, celebrities from the Portland Timbers soccer team and shows such as "General Hospital," "Teen Wolf," "Dancing with the Stars," "One Tree Hill," "Twilight" and "Pretty Little Liars" recite a "Dating Bill of Rights." One is, "You have the right to say, 'No.'"

"I thought including the celebrities was another way to stay with the audience," Jessup said. "It's a great way to raise awareness."

Experts from law enforcement agencies and advocacy groups provide advice on how to reduce risk of an attack.

For example, Anthony Neal, a tae kwon do master, recommends that joggers run in groups, alter their path regularly, avoid secluded areas, jog against traffic to keep an eye on any suspicious vehicles, insert only one ear bud when listening to music so the other ear is free to hear, and lock the door before leaving home so a predator can't get in.

The video was filmed in August 2011 in Los Angeles. Jessup said she recruited celebrities to participate in the video through a chain of existing contacts.

Jessup was a sophomore at St. Mary's Academy in Portland when she created the first video in 2006, after being inspired by surveillance footage of Florida teenager Carlie Brucia's abduction. She and her mother, Maggie Jessup, wrote the video script to complete her school's required community service project for high school graduation. It later developed into an all-volunteer video production effort.

Since the first video was released in 2006, there have been more than 1.5 million downloads. The second video has been downloaded about 2,000 times so far, Jessup said.

She created a "Train the Trainer" program to teach coaches, educators and others self-defense techniques and has traveled around the nation and to 45 countries to speak about and teach the techniques.

The techniques also have been incorporated into a physical education course at the Massachusetts Institute of Technology.

Jessup is the recipient of the National Caring Award, the Jefferson Award for Community Service, the Seventeen Magazine Mission Award and others and is a 2007 CNN Hero and an inductee in the Hall of Fame for Caring Americans.

She also is author of "Young Revolutionaries Who Rock: An Insider's Guide to Saving the World One Revolution at a Time," published in 2009.