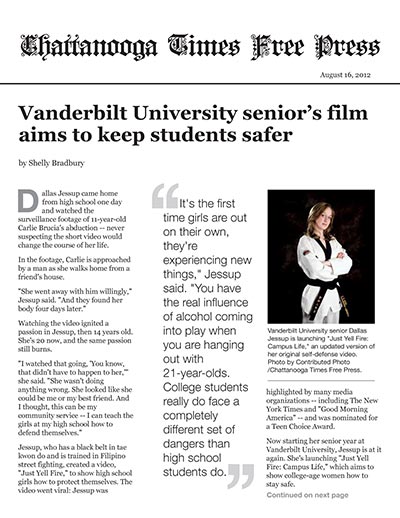 Dallas Jessup came home from high school one day and watched the surveillance footage of 11-year-old Carlie Brucia's abduction -- never suspecting the short video would change the course of her life.

In the footage, Carlie is approached by a man as she walks home from a friend's house.

"She went away with him willingly," Jessup said. "And they found her body four days later."

Watching the video ignited a passion in Jessup, then 14 years old. She's 20 now, and the same passion still burns.

"I watched that going, 'You know, that didn't have to happen to her,'" she said. "She wasn't doing anything wrong. She looked like she could be me or my best friend. And I thought, this can be my community service -- I can teach the girls at my high school how to defend themselves."

Jessup, who has a black belt in tae kwon do and is trained in Filipino street fighting, created a video, "Just Yell Fire," to show high school girls how to protect themselves. The video went viral: Jessup was highlighted by many media organizations -- including The New York Times and "Good Morning America" -- and was nominated for a Teen Choice Award.

Now starting her senior year at Vanderbilt University, Jessup is at it again. She's launching "Just Yell Fire: Campus Life," which aims to show college-age women how to stay safe.

"It's the first time girls are out on their own, they're experiencing new things," Jessup said. "You have the real influence of alcohol coming into play when you are hanging out with 21-year-olds. College students really do face a completely different set of dangers than high school students do."

The film walks viewers through seven rape or abduction scenarios, Jessup said, featuring places college women may be: a dorm room, a parking lot and a fraternity party.

First, the video shows the worst-case situation. Then, it rewinds and demonstrates how women can diffuse the situation and get away safely.

"Because at some point, you will find yourself in a sticky situation," Jessup said. "So we show two to four techniques to get out of it. Then we break it down and show you how to do it."

From biting to eye gouging to ear pulling, the techniques aren't meant to put women in a full-fledged fight, Jessup explained.

"There are some limitations," she said. "You're not going to bring down a 300-pound guy. But you can get those two to three seconds to save your life and get out of the situation."

At the national level, the most common violent crime reported on college campuses is aggravated assault, according to the National Center for Victims of Crime. In 2010, about 18 percent of reported violent crimes were forcible rapes -- but the center estimates that many more rapes went unreported. A 2006 study by the National Crime Victims Treatment and Research Center showed that only 12 percent of rapes of college women were reported to law enforcement.

"We're actually a really safe campus," he said. "We don't have many crimes to speak of, other than your typical theft. I've been doing this for about 19 months, and we've had two incidences where there was some type of assault on a student."

Only four instances of forced sexual offenses were reported at UTC between 2008 and 2010, according to the U.S. Department of Education. Eight aggravated assaults were reported during the same three-year span.

"It's a self-defense class," he said. "It builds self-confidence in your ability to fend off an aggressive attacker, and it works on your skill level, teaching what moves you can use to free yourself from the aggressor."

Boe said prevention is key, and while he hasn't seen "Just Yell Fire: Campus Life," he thinks anything that brings attention to the issue of personal safety is valuable.

"Any video that would promote an individual learning some type of self-defense or self-confidence would be beneficial," he said. "You can't go wrong."

UTC senior Sarah Torgeson said she usually feels safe on campus. She doesn't know any self-defense techniques, but she'd be interested in learning.

"I've looked into it," she said. "The only self-defense I know is from 'Miss Congeniality.' "