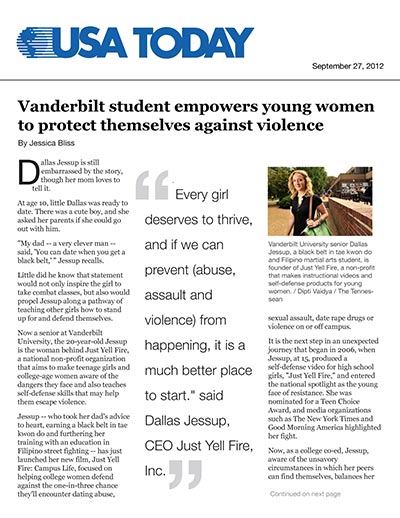 Dallas Jessup is still embarrassed by the story, though her mom loves to tell it.

At age 10, little Dallas was ready to date. There was a cute boy, and she asked her parents if she could go out with him.

Little did he know that statement would not only inspire the girl to take combat classes, but also would propel Jessup along a pathway of teaching other girls how to stand up for and defend themselves.

Now a senior at Vanderbilt University, the 20-year-old Jessup is the woman behind Just Yell Fire, a national non-profit organization that aims to make teenage girls and college-age women aware of the dangers they face and also teaches self-defense skills that may help them escape violence.

Jessup -- who took her dad's advice to heart, earning a black belt in tae kwon do and furthering her training with an education in Filipino street fighting -- has just launched her new film, Just Yell Fire: Campus Life, focused on helping college women defend against the one-in-three chance they'll encounter dating abuse, sexual assault, date rape drugs or violence on or off campus.

It is the next step in an unexpected journey that began in 2006, when Jessup, at 15, produced a self-defense video for high school girls, "Just Yell Fire," and entered the national spotlight as the young face of resistance. She was nominated for a Teen Choice Award, and media organizations such as The New York Times and Good Morning America highlighted her fight.

Now, as a college co-ed, Jessup, aware of the unsavory circumstances in which her peers can find themselves, balances her own education with teaching others like her how to stay safe.

"We are not here to be your parents," she said. "We are not telling you what your morals and values should be. That's something you decide by yourself. It should be your choice. But we are the backup for girls to live the life they want.

"Every girl deserves to thrive, and if we can prevent (abuse, assault and violence) from happening, it is a much better place to start."

Surveillance footage of an 11-year-old girl being abducted ignited the fire for Jessup's idea.Jessup, a high school student at the time, saw footage of Carlie Brucia's 2004 abduction. Carlie, a Sarasota, Fla., girl, was walking home from a friend's house and cut through a car wash. The business' surveillance camera showed a man approach Carlie and lead her away. They found her body several days later.

Jessup, who grew up in Portland, Ore., said her classmates were "sheltered" and "taken care of." They had no reason to expect this sort of violence would happen to them, but Jessup knew that it could.

"A lot of time when these things happen, no one's around and you are responsible for yourself," she said.

Jessup was inspired to create a homemade self-defense video for high school students as part of a community service project. Jessup took the film to a local college class to learn higher-quality production, and before long Jessup had film directors and producers backing what became a $600,000 project funded mostly by donations of time, equipment and money.

More than 1.8 million DVDs and downloads of the video have been distributed since that time, Jessup said.

According to a 2000 report by the U.S. Department of Justice, fewer than 5 percent of completed and attempted rapes against college women are reported to law enforcement officials. And many times, the students who report such crimes don't press charges.

Studies and experts offer various reasons for the reluctance. Students may want to avoid the trauma that can accompany the criminal process, they may lack proof the incident happened or they may not want family and friends to know.

Also, many incidents involve alcohol or drugs, and students fear they will get in trouble for that -- or that the case will come down to one person's word against another's.

"Sometimes, too, because of what the culture has told a victim, they may blame themselves," said Kathy Walsh, executive director of The Tennessee Coalition to End Domestic and Sexual Violence.Education is the key to preventing this type of victim perception, Walsh said. And, she added, "I really think our best prevention efforts are working with young men," because in most cases, "the young men are perpetrating the crime."

Organizations such as the White Ribbon Campaign -- an international organization promoting the male-led effort to end violence against women -- focus on educating men about healthy relationships and "no means no." This is important, Walsh said, because, "if you are just focusing on girls and the reduction strategies you can have, then you are again putting the responsibility on the girl."

That said, Walsh does see value in the self-confidence that can come with a woman knowing how to defend herself."If taking self-defense class is something that empowers you and makes you more confident, that's a good thing," Walsh said.

"Just Yell Fire: Campus Life" takes viewers through several campus scenarios where violence could result, including a boy cruising the dorm halls looking for someone to take advantage of, a woman attacked while walking alone on campus and abuse from a significant other.

Each scene begins with the worst case and then backs up and replays with the victim using fighting skills to get away safely. The techniques aren't meant to take down a 300-pound man or start an all-out fight, but the eye gouges, throat chops and nose strikes may at least help the victim extricate herself from the situation.

"Bad things can happen to anyone," Jessup said."Just because you are a good person or don't dress provocatively doesn't mean this isn't going to happen to you. â?¦ You should take it as your responsibility to know how to defend yourself. If you do that, and if you are more comfortable knowing you can defend yourself, then you are not going to live in fear, because I don't think you should."

Dallas Jessup, a Vanderbilt University senior and the woman behind Just Yell Fire, offers her tips for college campus safety:

2. If certain places on campus have reputations for mistreating girls or using date rape drugs, go somewhere else.

3. Look out for your friends. Despite the fact that you are the No. 1 person responsible for yourself and your safety, sometimes things happen and your friends need you (and vice versa) to be there and help them out of a situation. If you see something that shouldn't be happening, help them out or report it. Also, learn and teach your friends self-defense techniques so everyone knows what to do if something should happen.

4. Lock your door when sleeping or showering. This may seem inconvenient at times, but there are men who "hall cruise" at different hours of the day/night checking for unlocked doors to find their next victim.

5. Have fun. Get involved in campus activities and enjoy your college experience. This may sound irrelevant, but too often rapists are looking for self-conscious, "easy" victims. By keeping yourself busy, your head high and making a good group of friends, you're making your life a much safer and happier place.