Passion to Action: The 2012 World of Children Award Honorees 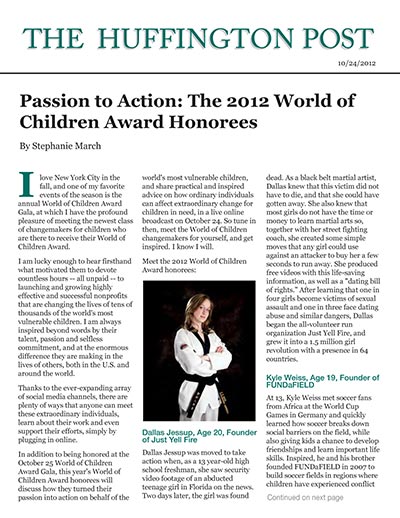 I am lucky enough to hear firsthand what motivated them to devote countless hours -- all unpaid -- to launching and growing highly effective and successful nonprofits that are changing the lives of tens of thousands of the world's most vulnerable children. I am always inspired beyond words by their talent, passion and selfless commitment, and at the enormous difference they are making in the lives of others, both in the U.S. and around the world.

Thanks to the ever-expanding array of social media channels, there are plenty of ways that anyone can meet these extraordinary individuals, learn about their work and even support their efforts, simply by plugging in online.

In addition to being honored at the October 25 World of Children Award Gala, this year's World of Children Award honorees will discuss how they turned their passion into action on behalf of the world's most vulnerable children, and share practical and inspired advice on how ordinary individuals can affect extraordinary change for children in need, in a live online broadcast on October 24. So tune in then, meet the World of Children changemakers for yourself, and get inspired. I know I will.

Kyle Weiss, Age 19, Founder of FUNDaFIELD
At 13, Kyle Weiss met soccer fans from Africa at the World Cup Games in Germany and quickly learned how soccer breaks down social barriers on the field, while also giving kids a chance to develop friendships and learn important life skills. Inspired, he and his brother founded FUNDaFIELD in 2007 to build soccer fields in regions where children have experienced conflict or major trauma. They soon learned of the therapeutic benefits that sports can have on young people who have been child soldiers, orphans or victims of disease. As an added educational benefit, FUNDaFIELD now builds soccer fields at schools, where children must enroll in and attend school in order to play. To date, FUNDaFIELD has built soccer fields in South Africa, Kenya and Uganda and is now working on plans to build fields in Swaziland, the Democratic Republic of the Congo, Pader in Northern Uganda and in still-devastated Haiti.

Dallas Jessup, Age 20, Founder of Just Yell Fire
Dallas Jessup was moved to take action when, as a 13 year-old high school freshman, she saw security video footage of an abducted teenage girl in Florida on the news. Two days later, the girl was found dead. As a black belt martial artist, Dallas knew that this victim did not have to die, and that she could have gotten away. She also knew that most girls do not have the time or money to learn martial arts so, together with her street fighting coach, she created some simple moves that any girl could use against an attacker to buy her a few seconds to run away. She produced free videos with this life-saving information, as well as a "dating bill of rights." After learning that one in four girls become victims of sexual assault and one in three face dating abuse and similar dangers, Dallas began the all-volunteer run organization Just Yell Fire, and grew it into a 1.5 million girl revolution with a presence in 64 countries.

Benoît Duchâteau-Arminjon, Age 46, Founder of Krousar Thmey
In 1998, Benoît Duchâteau-Arminjon left France to pursue a career in finance in Bangkok, Thailand. By March 1991, he decided to take one year off in order to work in Cambodian refugee camps. Moved by his experience with the Cambodian children, Benoît began a project which became the starting point for what is now known as Krousar Thmey ("New Family"). After Benoît learned that disability was considered a fatality in Cambodia, and that no special education facilities existed for disabled children, he and a Cambodian team began to develop Khmer Braille and sign language in order to help disabled children get a proper education for the first time in the country's history. His efforts led him to found Krousar Thmey, a national network of temporary protection homes, schools and training centers that provide educational, social, emotional and material support to 4,000 disadvantaged Cambodian children annually.

Dr. Nilas Young, Age 67, Founder of Heart to Heart International Children's Medical Alliance
In addition to his busy "day job" as Chief of Cardiothoracic Surgery and Residency Director at University of California, Davis Medical Center in Sacramento, California, Dr. Nilas Young founded Heart to Heart International Children's Medical Alliance in 1989 to provide life-saving medical care to infants and children in Russia. His nonprofit recruits, trains and deploys high-level pediatric cardiac specialists who travel to Russia as volunteers to mentor teams of Russian physicians to develop self-sustaining children's cardiac surgery centers that save the lives of thousands of children born with congenital heart defects. Under Dr. Young's visionary leadership, Heart to Heart International Children's Medical Alliance has saved the lives of more than 13,000 children and improved the health and lives of thousands more, and is now expanding efforts to develop access to life-saving heart surgery to children born anywhere in the Russian Federation.