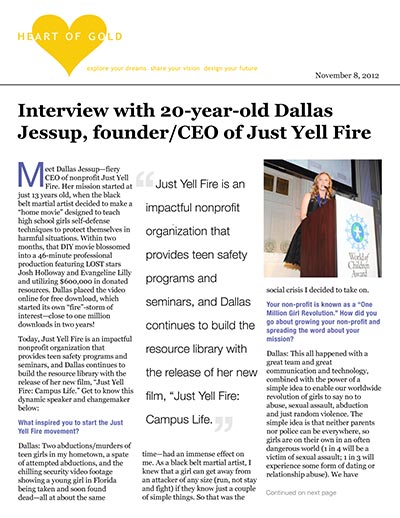 Meet Dallas Jessup—fiery CEO of nonprofit Just Yell Fire. Her mission started at just 13 years old, when the black belt martial artist decided to make a “home movie” designed to teach high school girls self-defense techniques to protect themselves in harmful situations. Within two months, that DIY movie blossomed into a 46-minute professional production featuring LOST stars Josh Holloway and Evangeline Lilly and utilizing $600,000 in donated resources. Dallas placed the video online for free download, which started its own “fire”-storm of interest—close to one million downloads in two years!

Today, Just Yell Fire is an impactful nonprofit organization that provides teen safety programs and seminars, and Dallas continues to build the resource library with the release of her new film, “Just Yell Fire: Campus Life.” Get to know this dynamic speaker and changemaker below:

What inspired you to start the Just Yell Fire movement?

Dallas: Two abductions/murders of teen girls in my hometown, a spate of attempted abductions, and the chilling security video footage showing a young girl in Florida being taken and soon found dead—all at about the same time—had an immense effect on me. As a black belt martial artist, I knew that a girl can get away from an attacker of any size (run, not stay and fight) if they know just a couple of simple things. So that was the social crisis I decided to take on.

Your non-profit is known as a “One Million Girl Revolution.” How did you go about growing your non-profit and spreading the word about your mission?

Dallas: This all happened with a great team and great communication and technology, combined with the power of a simple idea to enable our worldwide revolution of girls to say no to abuse, sexual assault, abduction and just random violence. The simple idea is that neither parents nor police can be everywhere, so girls are on their own in an often dangerous world (1 in 4 will be a victim of sexual assault; 1 in 3 will experience some form of dating or relationship abuse). We have discovered that if we empower girls to know their rights (to report violence against them, to have friends outside of their relationship, to say no to anything that threatens them in any way, and many more) and give them a hour’s worth of street fighting training, any girl of any size can get the few seconds she needs to get away from an attacker—regardless of the attacker’s size or strength.

We spread the word in three ways: 1) Producing two films that spotlight the dangers girls face, suggest some “stay safe” strategies, include a Dating Bill of Rights, and demonstrate street fighting techniques that give them the time they need to get away. We put these online for free viewing by any girl anywhere. 2) Doing seminars at schools and organizations teaching girls how to stay safe and to know their rights. 3) Training teachers and coaches the Just Yell Fire girls’ empowerment program so that they can teach their girls year after year and thus connect with more millions by leveraging their talents. Colleges including MIT offer the program as a for credit course, and many other schools, colleges, and universities are picking up the program as part of orientation for incoming freshman girls.

Evangeline Lilly appeared in your original “Just Yell Fire” video. How did you get her involved in the project and what would be your advice to others who want to involve a celebrity in their cause?

We were extremely fortunate that Evangeline took time away from her crazy busy schedule with the LOST series to appear in our first film. In today’s culture, youth respond to well-respected celebrities, so her help was critical in opening the minds of our target service group: girls and young women. It didn’t hurt either that Josh Holloway from LOST joined her in supporting Just Yell Fire; when girls see his part at the beginning of the movie, well, let’s say we have their absolute attention.

We learned the importance of celebrity endorsements for promoting a cause, as well as getting people to pay attention to the message. In our recent Just Yell Fire: Campus Life film for college girls and high school seniors, we had a dozen super-recognizable, well-respected television, film, sports, music, and fashion notables appearing to read our Dating Bill of Rights. Shay Mitchell (“Pretty Little Liars”), Jonathan Jackson (“Nashville” and “General Hospital”) and the rest have multi-million girl fan bases and their endorsements are powerful and meaningful.

It is easier than you might think to enlist a celebrity for your cause; it might be your local news anchor, radio personality, or an international supermodel (Anjhula helped us out on the last film). You’ll find that almost all “celebrities” are caring people and ready to step up to help out the right organization. Start by identifying several whose public personas match up with your mission and then approach them. It’s best if you know someone who knows them personally and can vouch for your organization but sometimes you just have to go direct. It is REALLY helpful if you’re a young person asking for help with her cause; in my experience, everyone wants to help a kid trying to make a social impact. Some of it also depends on their film or travel schedules, but if you keep at it and your cause helps people, you’ll find your help. It’s worth the extra effort and we are thankful for the many people who help us out.

In producing the new video, what have you learned about the need for self-defense on college campuses?

Dallas: Both self-defense and danger awareness are critical on college campuses. Girls go to college and it’s almost always their first experience living away from home. They’re accustomed to the safety and closely controlled high school and home environment. Plus many universities and colleges seem safe because of the campus environment. Unfortunately this causes girls to let down their guards and not realize that outsiders can walk onto campus at any time or cruise dorm halls looking for an open door. Similarly girls don’t expect college parties to be high-risk; unfortunately some are if you’re not aware and careful. Alcohol isn’t something that girls are typically experienced with, so that’s something new for them and judgment can be impaired. Random violence in parking lots or walking home from the library at night can be other opportunities for danger.

But almost all of the danger can be avoided by learning where the problem areas are. For Just Yell Fire, we teach girls some street fighting techniques to get away from almost any man of any size who intends to do you harm. Colleges all have campus security forces that do great jobs, but they can’t be everywhere. Across all socioeconomic strata, girls face a 1-in-3 chance of some sort of dating/relationship abuse and a 1-in-4 chance of sexual assault. Girls need the knowledge and the skills to keep themselves safe. Just Yell Fire is saying every campus should have this sort of awareness and self-defense program and colleges across the country are agreeing. Even the national sorority AOPi has taken up the cause with their hundreds of chapters to spread the Just Yell Fire information. We expect to put a stop to on campus violence against girls and young women.

What would girls be surprised to learn about self-defense?

Dallas: We’ve learned that girls think they need a black belt and years of training to be effective at self-defense. They are universally shocked that they can learn enough in one hour to get out of almost any situation with just a few street fighting tools. An attacker of any size can be disabled for a few seconds with an eye gouge, a groin slap, or a strategic bite. These techniques give girls the chance to get away and run, and that’s our advice: don’t stay and fight. Get yourself out of danger and escape as fast as you can.

You also authored a book, Young Revolutionaries Who Rock. Tell us about some of the inspiring changemakers you met along the way.

I wrote Young Revolutionaries Who Rock to spotlight some incredible kids that took on impossible social crises and made a big difference. One 13-year-old leukemia survivor learned that the bone marrow registry for minorities was terribly inadequate; he started a campaign to change that and, like Just Yell Fire, it went viral quickly and he increased that registry by 30 percent nationwide before he was 15. Another teen who was bullied by his friends and teachers at school because he was different took on the school system, won a big judgment, and used that money to establish highly effective tolerance programs in schools across Canada. Kids are taking on local causes in their communities, national causes, and international ones—whatever makes them angry. The message of the book is that indeed one kid can (and should) make a difference and the take away from the book is a blueprint for how to do it illustrated by teens who have done just that.

Along with running Just Yell Fire, you’re also a full-time college student at Vanderbilt University. What are your top tips for getting it all done?

Dallas: Education is important for all of us, but it’s also phenomenal to take on a social problem.  If you’re involved in both, you quickly learn to get more efficient on each one. There’s never enough time to do everything, but ‘so what’ if you only get As and Bs instead of perfect grades when you’re making a difference in other people’s lives.

If you’re passionate about a cause, the time challenges (sometimes requiring a bit less sleep or studying on a plane, in a car, or backstage at an event) pretty much take care of themselves. Teachers, colleges, grad schools, and employers don’t expect perfection in a student who is taking on social challenges; in most cases the kids involved in service get the best jobs, into great schools and the rest. It doesn’t mean you can slack on schoolwork, but if you do your best, that’s enough. Tell your teachers when there’s an irresolvable conflict. I have travelled 200,000 miles for speaking engagements and seminars, and every teacher has let me turn in schoolwork from a distance and my friends help with notes from missed classes. Note: I still have to do all the work but it’s nice to have the flexibility you earn among your friends and professors when you are involved in an important cause.

Tips for college students who are ready to get involved in their own project: Do classwork when it’s assigned rather than when it’s due. You never know when a speaking or media opportunity may arise and your impact will be lessened if you have to decline because you waited until the last minute to do your assignment. Second, let your professors and friends know in advance when you’ll need their help; you’ll be surprised at the response. Finally, pick your project by identifying some social injustice that makes you angry; that will translate into passion which will overcome any scheduling obstacle created by your expanded responsibilities.