Organizations empower revelers against darker side of holiday cheer

Young people should be able to go to a party, restaurant or club without fearing for their safety. 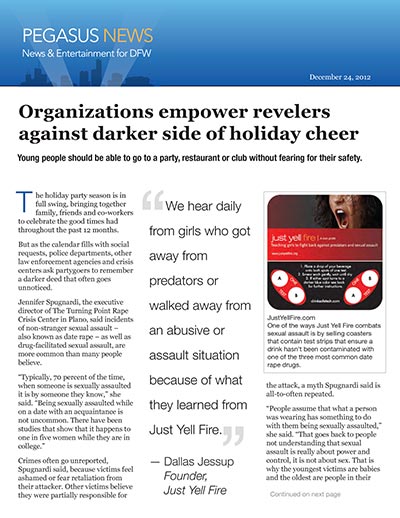 The holiday party season is in full swing, bringing together family, friends and co-workers to celebrate the good times had throughout the past 12 months.

But as the calendar fills with social requests, police departments, other law enforcement agencies and crisis centers ask partygoers to remember a darker deed that often goes unnoticed.

“Typically, 70 percent of the time, when someone is sexually assaulted it is by someone they know,” she said. “Being sexually assaulted while on a date with an acquaintance is not uncommon. There have been studies that show that it happens to one in five women while they are in college.”

Crimes often go unreported, Spugnardi said, because victims feel ashamed or fear retaliation from their attacker. Other victims believe they were partially responsible for the attack, a myth Spugnardi said is all-to-often repeated.

“People assume that what a person was wearing has something to do with them being sexually assaulted,” she said. “That goes back to people not understanding that sexual assault is really about power and control, it is not about sex. That is why the youngest victims are babies and the oldest are people in their 90s.”

Spugnardi said a big part of the work done at The Turning Point revolves around educating women about sexual crimes, adding that many women don’t realize they can be sexually assaulted by someone they are in a relationship with. The organization does this by speaking with more than 15,000 middle and high school students each year, while also sending advocates to local hospitals to meet with people who believe they may have been a victim of a sexual assault.

“We let the victims know what their options are in regard to reporting to law enforcement if they decide that is what they want to do,” she said. “We try and answer any questions the survivor may have.”

Drug-facilitated sexual assault occurs when the victim is drugged, usually by putting a drug into a drink. The drug, typically Rohypnol, Ketamine or GHB, incapacitates the victim, often resulting in the victim having no memory of the night before.

The high rate of occurrence of drug-facilitated sexual assault led Dallas Jessup, a senior at Vanderbilt University, to form Just Yell Fire, a group that includes 1.8 million women in 64 countries who are seeking to put an end to abuse and violence against young women.

“They’re really convenient as they fold into the size of a credit card, and when you’re out and about if you feel like there might be something amiss, you can instantly test your soft drink, cocktail, water or whatever to see if someone is trying to make you a victim,” Jessup said.

The nonprofit also has two films, “Just Yell Fire” for middle and high school students, and “Just Yell Fire: Campus Life,” which will be shown at more than 200 colleges and universities in 2013 as part of freshman orientation. The videos are also available on the group’s website at justyellfire.com/movie.

“It’s got great stay-safe information and some quick street fighting self defense skills that every girl should have in their bag of tricks,” Jessup said about. “One of the scenes focuses on date rape drugs, where an ill-intentioned bartender – and it could be anyone – drugs a girl’s drink. We show that you can avoid this problem by awareness, as well as using one of the drink testers that are out there.”

Jessup, 21, began Just Yell Fire when she was in high school as a way to share her experience in martial arts with young women so they would have a way to protect themselves from potential attackers.

“I organized all this activity into a nonprofit – followed by a 200,000-mile speaking tour – and we put together a training program for high schools and colleges so their teachers could learn this life-saving information and share with their students,” she said. “… At the end of the day, it’s up to girls to keep themselves safe, as police can’t be everywhere. We let them know their risks and how to avoid or at least minimize them.

“We hear daily from girls who got away from predators or walked away from an abusive or assault situation because of what they learned from Just Yell Fire.”

Jessup said she has learned that cases of drug-related sexual assault are not isolated cases and can happen anywhere, from big cities to small towns.

“In many cases they are just random acts by strangers who think it is somehow funny and put these drugs into girls’ drinks at parties or clubs,” she said. “When I’m out speaking I almost always hear from someone in the audience who experienced this horrible social phenomenon, sometimes involving a sexual assault, sometimes just the drugging where they lose control of themselves with sometimes brutal consequences.

“At Just Yell Fire we believe young women should be able to go to a party, restaurant or club without fearing for their own safety.”