Arming Girls With Tools to Fight Back 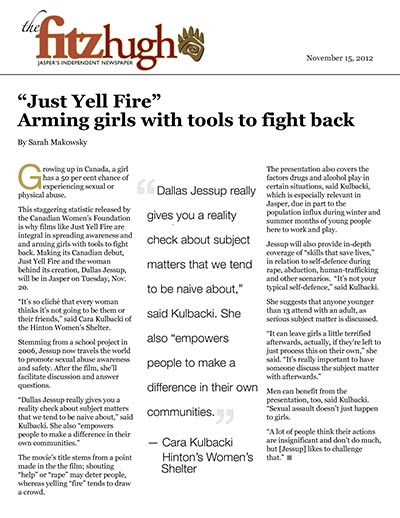 Growing up in Canada, a girl has a 50 per cent chance of experiencing sexual or physical abuse.

This staggering statistic released by the Canadian Women’s Foundation is why films like Just Yell Fire are integral in spreading awareness and and arming girls with tools to fight back. Making its Canadian debut, Just Yell Fire and the woman behind its creation, Dallas Jessup, will be in Jasper on Tuesday, Nov. 20.

“It’s so cliché that every woman thinks it’s not going to be them or their friends,” said Cara Kulbacki of the Hinton Women’s Shelter.

Stemming from a school project in 2006, Jessup now travels the world to promote sexual abuse awareness and safety. After the film, she’ll facilitate discussion and answer questions.

“Dallas Jessup really gives you a reality check about subject matters that we tend to be naive about,” said Kulbacki. She also “empower[s] people to make a difference in their own communities.”

The movie’s title stems from a point made in the the film; shouting “help” or “rape” may deter people, whereas yelling “fire” tends to draw a crowd.

The presentation also covers the factors drugs and alcohol play in certain situations, said Kulbacki, which is especially relevant in Jasper, due in part to the population influx during winter and summer months of young people here to work and play.

Jessup will also provide in-depth coverage of “skills that save lives,” in relation to self-defense during rape, abduction, human-trafficking and other scenarios.  “It’s not your typical self-defence,” said Kulbacki.

She suggests that anyone younger than 13 attend with an adult, as serious subject matter is discussed.

“It can leave girls a little terrified afterwards, actually, if they’re left to just process this on their own,” she said. “It’s really important to have someone discuss the subject matter with afterwards.”

Men can benefit from the presentation, too, said Kulbacki.  “Sexual assault doesn’t just happen to girls.

“A lot of people think their actions are insignificant and don’t do much, but Jessup likes to challenge that.”