The Sophian
by Veronica Hernandez, February 14, 2013 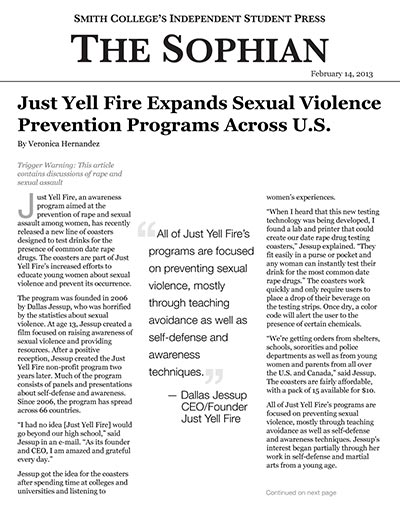 Just Yell Fire, an awareness program aimed at the prevention of rape and sexual assault among women, has recently released a new line of coasters designed to test drinks for the presence of common date rape drugs. The coasters are part of Just Yell Fire’s increased efforts to educate young women about sexual violence and prevent its occurrence.

The program was founded in 2006 by Dallas Jessup, who was horrified by the statistics about sexual violence. At age 13, Jessup created a film focused on raising awareness of sexual violence and providing resources. After a positive reception, Jessup created the Just Yell Fire non-profit program two years later. Much of the program consists of panels and presentations about self-defense and awareness. Since 2006, the program has spread across 66 countries.

“I had no idea [Just Yell Fire] would go beyond our high school,” said Jessup in an e-mail. “As its founder and CEO, I am amazed and grateful every day.”

Jessup got the idea for the coasters after spending time at colleges and universities and listening to women’s experiences.

“When I heard that this new testing technology was being developed, I found a lab and printer that could create our date rape drug testing coasters,” Jessup explained. “They fit easily in a purse or pocket and any woman can instantly test their drink for the most common date rape drugs.” The coasters work quickly and only require users to place a drop of their beverage on the testing strips. Once dry, a color code will alert the user to the presence of certain chemicals.

“We’re getting orders from shelters, schools, sororities and police departments as well as from young women and parents from all over the U.S. and Canada,” said Jessup. The coasters are fairly affordable, with a pack of 15 available for $10.

All of Just Yell Fire’s programs are focused on preventing sexual violence, mostly through teaching avoidance as well as self-defense and awareness techniques. Jessup’s interest began partially through her work in self-defense and martial arts from a young age.

When asked whether focusing on young women placed blame and responsibility on victims, Jessup expressed her belief that teaching self-defense was the best option.

“Neither police nor parents can be everywhere, so the best alternative in my opinion is indeed to remove the victim from the equation and that is the focus of Just Yell Fire,” Jessup said. She did not comment on focusing prevention campaigns on perpetrators other than mentioning punishment as deterrence.

While Jessup asserted that other focuses have not improved rates, a recent “Don’t Be That Guy” ad campaign in Canada, focused on addressing the behavior of men rather than “preventative” behaviors for women, has cut sexual assault incidents in Vancouver by 10 percent in 2011.

Jessup expressed no intentions to shift preventative focus to potential perpetrators, but did offer some insight to Just Yell Fire’s next steps.

“We just finalized a partnership for Just Yell Fire to launch on 123 college campuses and we want to expand those numbers,” Jessup said. The program also finalized two new international tours for the upcoming year.