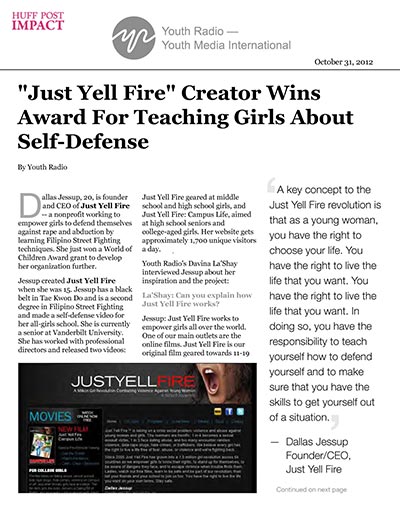 Dallas Jessup, 20, is founder and CEO of Just Yell Fire -- a nonprofit working to empower girls to defend themselves against rape and abduction by learning Filipino Street Fighting techniques. She just won a World of Children Award grant to develop her organization further.

Jessup created Just Yell Fire when she was 15. Jessup has a black belt in Tae Kwon Do and is a second degree in Filipino Street Fighting and made a self-defense video for her all-girls school. She is currently a senior at Vanderbilt University. She has worked with professional directors and released two videos: Just Yell Fire geared at middle school and high school girls, and Just Yell Fire: Campus Life, aimed at high school seniors and college-aged girls. Her website gets approximately 1,700 unique visitors a day.

Youth Radio's Davina La'Shay interviewed Jessup about her inspiration and the project:

La'Shay: Can you explain how Just Yell Fire works?

Jessup: Just Yell Fire works to empower girls all over the world. One of our main outlets are the online films. Just Yell Fire is our original film geared towards 11-19 year olds, addressing the issues that girls face in middle school and high school, such as walking home from a bus stop or going to an ATM... we provide them with Filipino Street Fighting techniques so that they could get out of that situation if they ever find themselves in it.

We have a Dating Bill of Rights included in each film, to remind girls that they do have the right and power to defend themselves and stand up for themselves.

In our second film, Just Yell Fire: Campus Life, it's geared towards high school seniors and college girls so that they can properly address the new situations they might face in college... such as "hall cruising" which is when guys will go cruise a hall and find which doors are unlocked and let himself in and go in and rape a young woman.

La'Shay: When and why did you get passionate about this issue?

Jessup: In my freshman year of high school, I saw the video footage of Carlie Brucia, who was a young girl in Florida and a man came up to her and said something and she went away with him willingly. They found her body four days later. And I thought, "You know, that didn't have to happen. She could have gotten herself out of the situation." No, she couldn't have beaten him to a pulp, but she could have gotten the two or three seconds that she needed to get herself out of the situation and be able to go home that night.

I went to an all girls high school in downtown Portland, Oregon and I could teach the 650 girls at my high school how to defend themselves... Statistically one in four of them was supposed to be date-raped before they graduate from college and I wanted to help those 150 girls that were supposed to be statistics.

La'Shay: Where does the name "Just Yell Fire" come from?

Jessup: Just Yell Fire is the concept that in today's society, girls often yell "Help" jokingly, just flirting with their friends. The good samaritan would get involved whenever they hear someone yell help, but that's not always the case.

And so in those situations, awareness is not being brought to the situation. And granted if you yell "Rape" or "I'm being taken," people are afraid to get involved because they don't know if there's a gun involved.

But if you yell "Fire" in an attack situation, peoples' self-interest kicks in. They're saying, "Where's the fire?" "What can I do to help?"

We also try to teach it as a trigger to remember for your getaway instincts. It's also a word of empowerment instead of being a victim.

La'Shay: What is your one piece of advice to young girls?

About 80 percent of women who are raped are under 25. We should make ourselves aware of what's going on. Beyond that you should live a life without fear. There will be hiccups along the way, but this shouldn't be one of them.

La'shay: How do you feel about winning the World of Children Award?

Jessup: It is quite the honor and it's extremely humbling. The people I was surrounded by were amazing. I'm really grateful for that. It's a phenomenal organization to be working with over the next two years with this grant to have Just Yell Fire make an even bigger impact.

We would love to have Just Yell Fire in every high school, middle school and college across the country and in the world. We want it to be a part of the everyday life of girls so they know the dangers that are out there and we can put a dent in that one in four women will be date-raped before they graduate college and one in three will experience dating violence.