With 'Brave,' 'Snow White and The Huntsman,' and 'The Hunger Games' we're seeing the box-office triumph of strong, young female characters. But has Hollywood – or American culture – really changed how it sees women? 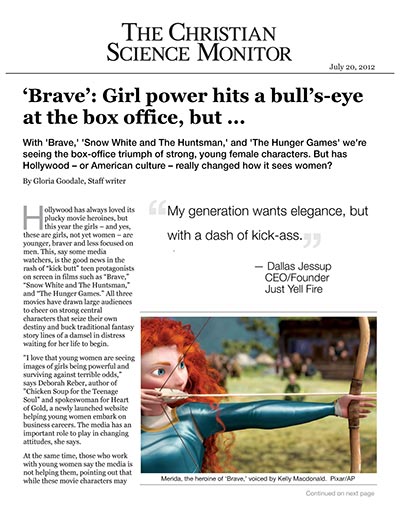 Hollywood has always loved its plucky movie heroines, but this year the girls – and yes, these are girls, not yet women – are younger, braver and less focused on men. This, say some media watchers, is the good news in the rash of “kick butt” teen protagonists on screen in films such as “Brave,” “Snow White and The Huntsman,” and “The Hunger Games.” All three movies have drawn large audiences to cheer on strong central characters that seize their own destiny and buck traditional fantasy story lines of a damsel in distress waiting for her life to begin.

"I love that young women are seeing images of girls being powerful and surviving against terrible odds,” says Deborah Reber, author of "Chicken Soup for the Teenage Soul” and spokeswoman for Heart of Gold, a newly launched website helping young women embark on business careers. The media has an important role to play in changing attitudes, she says.

At the same time, those who work with young women say the media is not helping them, pointing out that while these movie characters may be dashing, they are still sexy, mostly skimpily dressed and, most important, dwelling in purely fantastical realms, disconnected from the problems and realities of the modern world.

'Brave' princess breaks Disney stereotypes. Or does she?

Merida (“Brave”), Snow White (“The Huntsman”), and Katniss (“The Hunger Games”) may be noble characters, says Ron Bishop, culture professor at Drexel University in Philadelphia, “but what are they actually doing and what’s the context in which they flex their empowerment?” The strong female characters are kept at a safe distance, he says via e-mail, adding, “they're not running for Congress, vying for a spot on the board of directors, or trying out for the boys football team. “

Beyond that, not all female moves into traditional male realms are progress, says Robert Epstein, former editor of Psychology today and author of “Teen 2.0: Saving Our Children and Families from the Torment of Adolescence.”

He points out that the vast majority of young role model heroes out there are still male, and they still rescue damsels in distress. The change is bigger on the streets, he says, adding via e-mail, “where we've seen a dramatic increase in violence by teen females, and where females now equal males in alcohol, drug abuse, and smoking."

But while some elements may still be retrograde, overall these films reflect a new generation, says 20-something Dallas Jessup. “My generation wants elegance but with a dash of kick-ass,” says the founder of Just Yell Fire, a nonprofit service project that has grown into a “Million Girl Revolution” across 64 countries. “They want to be powerful, but they also want to be sought after,” she says, calling the slew of teen empowerment films a “forward step.” For its part, Hollywood takes its cue from the box-office, points out Piper Weiss, Yahoo! Shine senior editor and culture expert. In its search to capitalize on the huge success of the “Twilight” franchise, Hollywood landed on “The Hunger Games.” That film has taken in a global box office of more than $600 million. No wonder, she adds, that studios see the power of a teen girl with a bow and arrow.

But society has changed as well and the studios have adjusted, says Mary Ellen Balchunis, who teaches media and politics and women at La Salle University in Philadelphia. Half of our college students, teens, and children today are coming from homes of divorced parents, she points out.

“Most of these young people,” she says via e-mail, “grew up with the Disney Princess stories with the fairy tale endings, yet over half of these young people have experienced a very different reality.” She says this generation sees their single mothers doing it all. “Girls and young women know that they can no longer rely on a man/prince for that fairy tale ending. They need to be strong, empowered and able to stand on their own. Disney as well as other movie producers know their target audiences, and they are adjusting the story line to be more in line with today's realities.”