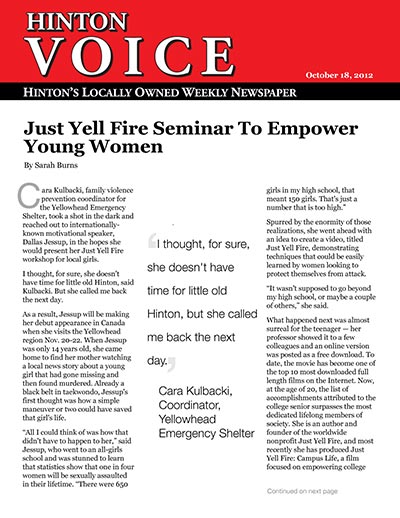 Cara Kulbacki, family violence prevention coordinator for the Yellowhead Emergency Shelter, took a shot in the dark and reached out to internationally-known motivational speaker, Dallas Jessup, in the hopes she would present her Just Yell Fire workshop for local girls.

“I thought, for sure, she doesn’t have time for little old Hinton,” said Kulbacki. “But she called me back the next day.”

As a result, Jessup will be making her debut appearance in Canada when she visits the Yellowhead region Nov. 20-22. When Jessup was only 14 years old, she came home to find her mother watching a local news story about a young girl that had gone missing and then found murdered. Already a black belt in taekwondo, Jessup’s first thought was how a simple maneuver or two could have saved that girl’s life.

“All I could think of was how that didn’t have to happen to her,” said Jessup, who went to an all-girls school and was stunned to learn that statistics show that one in four women will be sexually assaulted in their lifetime. “There were 650 girls in my high school, that meant 150 girls. That’s just a number that is too high.”

Spurred by the enormity of those realizations, she went ahead with an idea to create a video, titled Just Yell Fire, demonstrating techniques that could be easily learned by women looking to protect themselves from attack.

“It wasn’t supposed to go beyond my high school, or maybe a couple of others,” she said.

What happened next was almost surreal for the teenager – her professor showed it to a few colleagues and an online version was posted as a free download. To date, the movie has become one of the top 10 most downloaded full length films on the Internet. Now, at the age of 20, the list of accomplishments attributed to the college senior surpasses the most dedicated lifelong members of society. She is an author and founder of the worldwide nonprofit Just Yell Fire, and most recently she has produced Just Yell Fire: Campus Life, a film focused on empowering college girls to know their rights and stay safe.

“My parents make me do my own work and they never said ‘No you can’t do that’ they just pointed out the obstacles and said ‘How are you going to get around them?’” said Jessup about what set her apart from the average teen.

Along with self defence tactics, Jessup teaches young girls that, for them, there is no time like the present to make a difference in the world.

“I want to encourage them to get out there now, when you don’t have commitments, and make things happen,” she said.

“Put the right people around you and you can’t help but get things done.”

Jessup will be in Hinton Nov. 21 from 6:30-8:30 at the Hinton Centre, tickets can be purchased from The Old Grind. To watch the original Just Yell Fire video as well as Jessup’s more recent works, visit www.justyellfire.com.