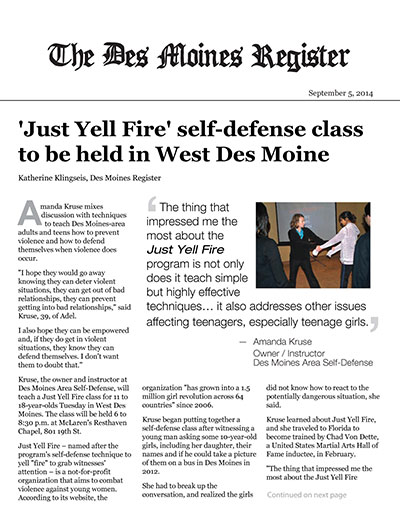 Amanda Kruse mixes discussion with techniques to teach Des Moines-area adults and teens how to prevent violence and how to defend themselves when violence does occur.

I also hope they can be empowered and, if they do get in violent situations, they know they can defend themselves. I don't want them to doubt that."

Kruse, the owner and instructor at Des Moines Area Self-Defense, will teach a Just Yell Fire class for 11 to 18-year-olds Tuesday in West Des Moines. The class will be held 6 to 8:30 p.m. at McLaren's Resthaven Chapel, 801 19th St.

Just Yell Fire – named after the program's self-defense technique to yell "fire" to grab witnesses' attention – is a not-for-profit organization that aims to combat violence against young women. According to its website, the organization "has grown into a 1.5 million girl revolution across 64 countries" since 2006.

Kruse began putting together a self-defense class after witnessing a young man asking some 10-year-old girls, including her daughter, their names and if he could take a picture of them on a bus in Des Moines in 2012.

She had to break up the conversation, and realized the girls did not know how to react to the potentially dangerous situation, she said.

Kruse learned about Just Yell Fire, and she traveled to Florida to become trained by Chad Von Dette, a United States Martial Arts Hall of Fame inductee, in February.

"The thing that impressed me the most about the Just Yell Fire program is not only does it teach simple but highly effective techniques… it also addresses other issues affecting teenagers, especially teenage girls," Kruse said.

Kruse, who has a brown belt in Taekwondo and college degrees in sociology, psychology and social work, began teaching women's self-defense classes in April. She then started holding Just Yell Fire classes in May.

Males and females are both welcomed at Kruse's Just Yell Fire classes. Kruse said the discussions and techniques are applicable to both sexes.