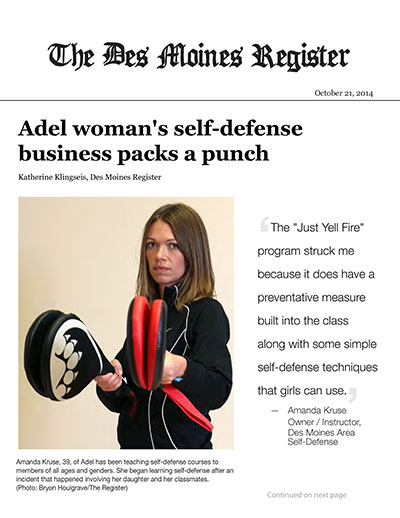 Amanda Kruse does more than just teach her self-defense class participants how to jab and strike their way out of attacks. She also tells them how to prevent getting into those dangerous situations.

"I think they go away knowing a lot more about violence and predicting violence that they can deter violence before it ever gets to the point of an attack," said Kruse, 39, of Adel. "They also go away empowered and confident that they could fight back if they were ever in an attack situation."

Kruse, founder of Des Moines Area Self Defense, began teaching these self-defense classes in April. They cater to people of all ages, Kruse said.

Kruse talked with The Des Moines Register about why she started teaching self-defense classes and her hopes for the future of the courses.

Q. How do you become interested in teaching self-defense classes?

A. It stemmed from an experience that I had when I was chaperoning a group of fourth-graders a couple years ago. We were on our way back from Drake on the city bus, and the bus was very crowded, so it was standing-room only.

The kids were standing in the middle — it was very loud — and there were people sitting around the kid. I could see a conversation happening between an 18-to-20-year-old male and a couple of the girls. It just didn't look right. I could not hear what was going on, so I called one of the girls over, which happened to be my daughter, and said, "What's going on?" She said, "He asked to take a picture."

I stepped in, and I said, "Stop." He did. The girls had said no to the picture, which was fabulous, but as I got to thinking about it, I see the discomfort in their faces. I thought, "Why not put something together for these girls to let them know exactly what to do in this situation and if they're grabbed, to know how to escape that situation, and it's OK to be rude sometimes?"

I put together a class for those girls at that school with my Tae Kwan Do instructor.

Q. What kind of training did you do to be prepared to teach "Just Yell Fire"?

A. The "Just Yell Fire" program struck me because it does have a preventative measure built into the class along with some simple self-defense techniques that girls can use.

It's aimed at teen girls and college-aged girls. It was started by 14-year-old Dallas Jessup in 2006. She saw surveillance video of a young girl being abducted in Florida, in which this girl was found dead a few days later.

Dallas wanted her Filipino street-fighting instructor, Chad Von Dette, to put together a video for her classmates so that they would know what to do in that situation if they were ever grabbed so they could escape and that wouldn't happen to them.

It ended up escalating to a point where they had celebrities and funding, and they put together the first "Just Yell Fire" video, and it went viral.

It's free to download online now, along with the campus life video, which came out a few years later aimed at young women and the issues they face going to college.

I was impressed with the program when I did my research. I went to Florida to train in February, and he's been great and supportive.

Q. What kind of reception has your classes received?

A. I think it has been really good. The classes are short, generally — two to two and a half hours. It's basically an introduction.

With the "Just Yell Fire" classes, all of the participants go home with a video, a training video. The rest of them, they go home with all of the materials they do to practice at home. That's the intention. The reception has been good. I think that members are increasing as time goes on and people are exposed to the program.

Q. Where do you hope to see Des Moines Area Self Defense go in the future?

A. I had one experience where there was a group at Valley (High School), students against sexual assault. They put this group together on their own in response to an incident that had happened at Valley.

They wrote a grant and got funding to bring me and another person in to talk about consent.

There were probably 60, 70 kids — high school kids, female, male. The response I got from them and the excitement and what they learned and their passion for fighting back against sexual assault was very, very impressive and inspired me.

I would like them to take that message that I had to say about prevention, deterrence, what we can do to stop the sexual assault in the first place, but also go ahead and take the physical techniques and pass them along.

Let other people know they can do simple things to fight back if they are in an attack situation. Doing something is always better than doing nothing.

I just hope word spreads that something can be done.