The 30 Top Thinkers Under 30: Dallas Jessup 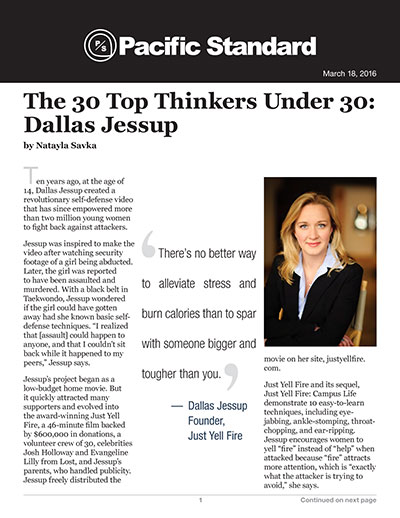 Ten years ago, at the age of 14, Dallas Jessup created a revolutionary self-defense video that has since empowered more than two million young women to fight back against attackers.

Jessup was inspired to make the video after watching security footage of a girl being abducted. Later, the girl was reported to have been assaulted and murdered. With a black belt in Taekwondo, Jessup wondered if the girl could have gotten away had she known basic self-defense techniques. “I realized that [assault] could happen to anyone, and that I couldn’t sit back while it happened to my peers,” Jessup says.

Jessup’s project began as a low-budget home movie. But it quickly attracted many supporters and evolved into the award-winning Just Yell Fire, a 46-minute film backed by $600,000 in donations, a volunteer crew of 30, celebrities Josh Holloway and Evangeline Lilly from Lost, and Jessup’s parents, who handled publicity. Jessup freely distributed the movie on her site, justyellfire.com.

Just Yell Fire and its sequel, Just Yell Fire: Campus Life demonstrate 10 easy-to-learn techniques, including eye-jabbing, ankle-stomping, throat-chopping, and ear-ripping. Jessup encourages women to yell “fire” instead of “help” when attacked because “fire” attracts more attention, which is “exactly what the attacker is trying to avoid,” she says.

Jessup has received countless thank-you notes from young women who have used her tips to successfully fight back. One girl writes: “A guy came up from behind me and grabbed me around the neck. I yelled fire and … all of a sudden I remembered everything you taught me. I actually broke his nose. I am 5 ft. 1 in. tall and weigh 105 pounds. He was huge. I got away and he got caught.”

Jessup began practicing martial arts at age 10, when she announced to her parents that she wanted to date. Her dad joked that she could date as soon as she earned a black belt. Three years later, Jessup held up her end of the bargain.

We’ll be publishing profiles of this year’s list of the 30 top thinkers under 30 throughout the month of March. Visit this page every day to read about another young person who is making an impact on the social, political, and economic issues we cover every day at Pacific Standard.

Though Jessup emphasizes that young women don’t need to be interested in martial arts to learn how to defend themselves, Jessup herself happens to love practicing various martial arts. “There’s no better way to alleviate stress and burn calories than to spar with someone bigger and tougher than you,” she says. Jessup appreciates the challenge of “limping home after practice, exhausted and sporting your newest bruises.”

Since the non-profit’s launch in 2006, Jessup has spoken to more than 100,000 girls in schools and colleges around the world, and her films and techniques are used to help girls in more than 65 countries. She has also produced a second movie for women in college, and wrote her first book at 16, about young revolutionaries. Her early exposure to “the power of communications to influence change” inspired her to study communications at Vanderbilt University, and to pursue work in corporate communications after college. In 10 years, Jessup sees herself “leading an influential tech or media company with social responsibility as an element of its DNA.”