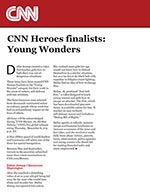 Dallas Jessup created a video that teaches girls how to fight their way out of dangerous situations.
(CNN) -- Three teens have been named CNN Heroes finalists in the "Young Wonder" category for their work in the areas of autism, self-defense and race relations.
The three honorees were selected from thousands nominated online as ordinary people whose work has had an extraordinary impact on the lives of others.
All three will be acknowledged during "CNN Heroes: An All-Star...
Read Full Article