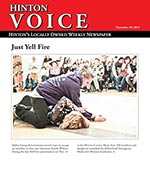 Dallas Jessup demonstrates several ways to escape an attacker, in this case volunteer Emilie Wilson, during the Just Yell Fire presentation on Nov. 21 at the Hinton Centre. More than 100 mothers and daughters attended the Yellowhead Emergency Shelter for Women fundraiser. 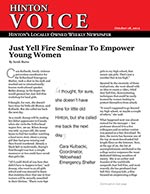 Cara Kulbacki, family violence prevention coordinator for the Yellowhead Emergency Shelter, took a shot in the dark and reached out to internationally-known motivational speaker, Dallas Jessup, in the hopes she would present her Just Yell Fire workshop for local girls.
“I thought, for sure, she doesn’t have time for little old Hinton,” said Kulbacki. “But she called me back the next day.”
As a result, Jessup will be making her debut appearance...
Read Full Article