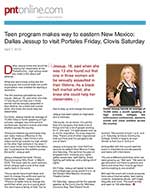 Dallas Jessup knew she would be helping her classmates at her Portland Ore., high school when she made a film about self defense.
What she didn’t know is that the film would grow into a world-wide non-profit organization now credited for starting a revolution.
The film teaches self-defense techniques. Jessup, 18, said when she was 13 she found out that one in three women will be sexually assaulted in their lifetime. As a black belt martial artist, she knew she could help her...
Read Full Article 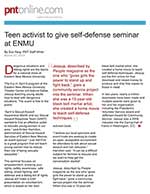 Teen activist to give self-defense seminar at ENMU

Dangerous situations and dating rights are the topics for a national show at Eastern New Mexico University.
The 6 p.m. April 9 program at the Eastern New Mexico University Theater Center will feature Dallas Jessup teaching young adults how to deal with dangerous situations. The event is free to the public.
“April is Sexual Assault Awareness Month and our Sexual Assault Response Team (SART) wanted to find an effective outlet to educate young women in our area,” said Amber...
Read Full Article