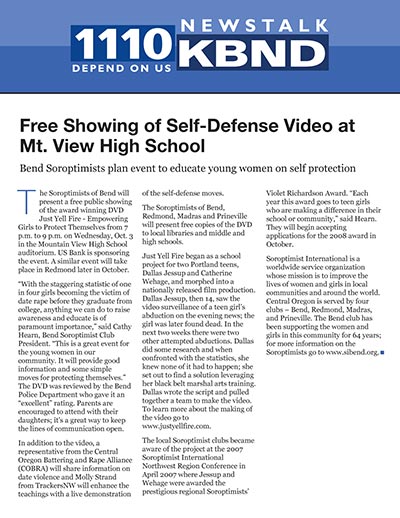 BEND, Sept. 4, 2007 – The Soroptimists of Bend will present a free public showing of the award winning DVD Just Yell Fire - Empowering Girls to Protect Themselves from 7 p.m. to 9 p.m. on Wednesday, Oct. 3 in the Mountain View High School auditorium. US Bank is sponsoring the event. A similar event will take place in Redmond later in October.

“With the staggering statistic of one in four girls becoming the victim of date rape before they graduate from college, anything we can do to raise awareness and educate is of paramount importance,” said Cathy Hearn, Bend Soroptimist Club President. “This is a great event for the young women in our community. It will provide good information and some simple moves for protecting themselves.” The DVD was reviewed by the Bend Police Department who gave it an “excellent” rating. Parents are encouraged to attend with their daughters; it’s a great way to keep the lines of communication open.

In addition to the video, a representative from the Central Oregon Battering and Rape Alliance (COBRA) will share information on date violence and Molly Strand from TrackersNW will enhance the teachings with a live demonstration of the self-defense moves.

The Soroptimists of Bend, Redmond, Madras and Prineville will present free copies of the DVD to local libraries and middle and high schools.

Just Yell Fire began as a school project for two Portland teens, Dallas Jessup and Catherine Wehage, and morphed into a nationally released film production. Dallas Jessup, then 14, saw the video surveillance of a teen girl’s abduction on the evening news; the girl was later found dead. In the next two weeks there were two other attempted abductions. Dallas did some research and when confronted with the statistics, she knew none of it had to happen; she set out to find a solution leveraging her black belt marshal arts training. Dallas wrote the script and pulled together a team to make the video. To learn more about the making of the video go to www.justyellfire.com.

The local Soroptimist clubs became aware of the project at the 2007 Soroptimist International Northwest Region Conference in April 2007 where Jessup and Wehage were awarded the prestigious regional Soroptimists’ Violet Richardson Award. “Each year this award goes to teen girls who are making a difference in their school or community,” said Hearn. They will begin accepting applications for the 2008 award in October.

Soroptimist International is a worldwide service organization whose mission is to improve the lives of women and girls in local communities and around the world. Central Oregon is served by four clubs – Bend, Redmond, Madras, and Prineville. The Bend club has been supporting the women and girls in this community for 64 years; for more information on the Soroptimists go to www.sibend.org.