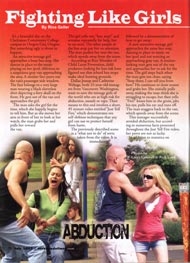 It's a beautiful day on the Clackamas Community College campus in Oregon City, Oregon. But something ugly is about to happen.

An attractive teenage girl approaches a busy bus stop. She dances in place to the music playing on her ipod, oblivious to a suspicious gray van approaching the area. A sinister face peers out the van's passenger side window. The face belongs to a very large man wearing a black sleeveless shirt depicting a fiery skull on the front. He gets out of the van and approaches the girl.

The man asks the girl for the time, which she happily begins to tell him. But as she moves her arm in front of her to look at her watch, the man grabs her and pulls her toward the van.

The girl yells out, "hey, stop!" and screams repeatedly for help, but to no avail. The other people at the bus stop pay her no attention. The man pushes her into the van, which speeds away from the scene.

Dallas Jessup and Catherine Wehage, both 15-year-old teenagers from Vancouver, Washington, want to save the teenage girls of the world who are at high risk for abduction, assault or rape. Their means to this end involves a short 45 minute video entitled "Just Yell Fire," which demonstrates ten self-defense techniques that any girl can use to protect herself from harm.

The previously described scene is a "what not to do" of sorts taken from the video. It is immediately followed by a demonstration of how to get away:

A new attractive teenage girl approaches the same bus stop, dancing in place to music on her ipod and not noticing an approaching gray van. A sinister-looking man gets out of the van and approaches her to ask for the time. The girl steps back when the man gets too close, saying "Stop there, I can tell you from here." He continues to draw nearer and grabs her. She initially pulls away, making the man think she is struggling to escape, but then yells "Fire!" knees him in the groin, jabs his eye, pulls his ear and runs off. The man staggers back to the van, which speeds away from the scene.

This teenager successfully avoided abduction, but according to numerous facts presented throughout the Just Yell Fire video, her peers are not as lucky.

In addition to statistics on abduction and rape, the video features a dating "Bill of Rights," a question-and-answer session with the Vancouver Chief of Police to advocate prevention as the key to personal protection, several scenarios of typical dangerous situations followed by demonstrations of how to get away, and specific instructions on how to employ the ten self-defense techniques.

The techniques in the film, though geared toward girls ages 11-19 (statistically the most targeted age group for abduction and assault), seem simple and effective enough to be used by any untrained fighter who ends up in an attack situation.

The concept for the video began with the 2004 abduction and murder of 11-year-old Carlie Brucia in Sarasota, Florida. Dallas' mother remembers repeatedly watching footage of the abduction, taken from a car wash surveillance camera.

"I recorded it and had Dallas watch it," explains Maggie Jessup. "[Dallas] had her black belt... and we had discussed the dangers of the world, but here was a girl about Dallas' age who just walked away with a guy she didn't know. I wanted Dallas to see this. I wanted to make sure she truly understood the danger."

Dallas turned to her mother after watching the tape and said, "She didn't know what to do. I could teach girls how to get away." Inspired by Carlie Brucia and queries from friends asking for self-defense techniques, Dallas asked a friend, Catherine Wehage, to help her make a "little video" to give to people to pass around.

"Everything went crazy," Dallas explains. "Cat's mother, who works at Clackamas Community College in Oregon, introduced us to her boss, Brian Rose, head of the music department. He gave us advice and asked if he could show the script to some people. Takafumi Uehara... offered to direct the movie and brought in a professional crew. People and companies loved it and donated everything we needed. Our friends agreed to be extras. The Chief of Police agreed to be in the movie to talk about how not to get in a bad situation. Chad Von Dette and Park Maguire flew in from San Diego and agreed to explain the techniques. Park was our bad guy. Matt Wadzita agreed to be our rapist boyfriend with the intention of helping girls all over the world."

"I was inspired to create this film because it would help empower young girls with rights they might not know whey already have in a relationship and teach them enough knowledge on how to get away from a sticky situation," adds Wehage. "By creating this film, we are not only helping girls all over the nation but also helping people we know who could or already have been affected with abductions or rape."

A cousin of Wehage's worked on the set hit television show "Lost" and asked the cast for assistance with the film. Evangeline Lilly and Josh Holloway stepped up without hesitation to make cameos.

"For a cause like this, I'd strip down naked and run down Main Street," said Holloway.

"What you see in the movies, like Jackie Chan flying through the air, isn't practical for teen girls," said Park Maguire, the film's "bad guy". "Just Yell Fire" shows them streetwise, age/size/strength-appropriate techniques for middle and high school girls to get away from attackers... verbal as well as physical information that can save their lives."

Martial arts instructor Von Dette came up with ten easy techniques that girls could use that would be simple and easy to learn, effective and instinctive. They include such things as biting, yelling fire and kicking.

"Kids already know how to bite and to poke someone in the eye," explains the film's website, justyellfire.com. "They just don't think of it or are afraid they will get into trouble."

"Sure, some of these techniques are rough, but at the end of the day, my daughter comes home," says Von Dette.

In order to make the film happen, the girls collected more than $500,000 in donations. Continuing donation money goes for production and postage costs. The film can be downloaded for free from its official website, or can be ordered or copied for free.

"The reason for that is, if a 14-year-old girl feels she needs this, she rarely has the means to pay," Maggie Jessup explained. "We want her to have it, we want her to be safe. There is no charge. You can make copies and give them to everyone you know. We don't allow the movie to be sold at any price, though. On that we are adamant."

The film premiered in early October of 2006. Since its debut, more than 1.7 million hits have been recorded on its website according to Maggie Jessup. The film has been downloaded more than 97,000 times. More than 8,000 DVDs have been handed out in more than 3,500 schools and at other functions. Thirty-four countries have requested copies and letters have been received from people who have downloaded the film around the world. There have even been requests to get the film dubbed into different languages.

Additionally, they have won the Clark County Youth Inspiration Award and the North Portland Soroptomist's Violet Richardson Award. Dallas was recognized as Washington State's top high school volunteer by the Prudential Spirit of Community Awards in Early February of this year.

The experience has been truly inspirational for Dallas and Catherine. Dallas thinks her work on this film might morph into a career, while Catherine hopes to continue involvement with community service projects.

They are especially inspired by emails received from all over the world from schools and groups who use the film to teach and from victims who thank the girls for making sure bad things don't happen to others.

"If a picture is worth a thousand words, I think a film might be worth ten thousand," concludes Dallas. "Our passion is for every girl everywhere to see the film and to learn enough to put predators and rapists out of business."

For more information, a free download of the film or to make a donation please visit www.justyellfire.com.

The Dating Bill of Rights

I have the right to: