Teaching Girls to Fight Back Against Sexual Assault 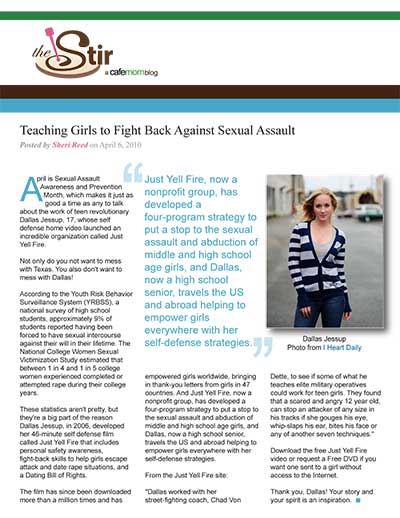 April is Sexual Assault Awareness and Prevention Month, which makes it just as good a time as any to talk about the work of teen revolutionary Dallas Jessup, 17, whose self defense home video launched an incredible organization called Just Yell Fire.

According to the Youth Risk Behavior Surveillance System (YRBSS), a national survey of high school students, approximately 9% of students reported having been forced to have sexual intercourse against their will in their lifetime. The National College Women Sexual Victimization Study estimated that between 1 in 4 and 1 in 5 college women experienced completed or attempted rape during their college years.

These statistics aren't pretty, but they're a big part of the reason Dallas Jessup, in 2006, developed her 46-minute self defense film called Just Yell Fire that includes personal safety awareness, fight-back skills to help girls escape attack and date rape situations, and a Dating Bill of Rights.

The film has since been downloaded more than a million times and has empowered girls worldwide, bringing in thank-you letters from girls in 47 countries. And Just Yell Fire, now a nonprofit group, has developed a four-program strategy to put a stop to the sexual assault and abduction of middle and high school age girls, and Dallas, now a high school senior, travels the US and abroad helping to empower girls everywhere with her self-defense strategies.

From the Just Yell Fire site:

"Dallas worked with her street-fighting coach, Chad Von Dette, to see if some of what he teaches elite military operatives could work for teen girls. They found that a scared and angry 12 year old, can stop an attacker of any size in his tracks if she gouges his eye, whip-slaps his ear, bites his face or any of another seven techniques."

Download the free Just Yell Fire video or request a Free DVD if you want one sent to a girl without access to the Internet.

Thank you, Dallas! Your story and your spirit is an inspiration.

Are you planning to enroll your kids in some sort of self-defense course? If so, at what age?