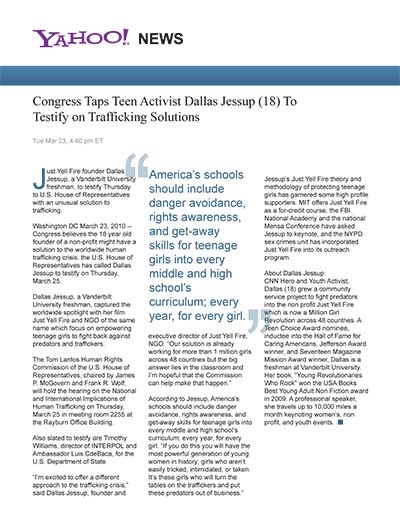 Washington DC (Vocus) March 23, 2010 -- Congress believes the 18 year old founder of a non-profit might have a solution to the worldwide human trafficking crisis: the U.S. House of Representatives has called Dallas Jessup to testify on Thursday, March 25.

Dallas Jessup, a Vanderbilt University freshman, captured the worldwide spotlight with her film Just Yell Fire and NGO of the same name which focus on empowering teenage girls to fight back against predators and traffickers.

The Tom Lantos Human Rights Commission of the U.S. House of Representatives, chaired by James P. McGovern and Frank R. Wolf, will hold the hearing on the National and International Implications of Human Trafficking on Thursday, March 25 in meeting room 2255 at the Rayburn Office Building.

Also slated to testify are Timothy Williams, director of INTERPOL and Ambassador Luis CdeBaca, for the U.S. Department of State.

“I’m excited to offer a different approach to the trafficking crisis,” said Dallas Jessup, founder and executive director of Just Yell Fire, NGO. “Our solution is already working for more than 1 million girls across 48 countries but the big answer lies in the classroom and I’m hopeful that the Commission can help make that happen.”

According to Jessup, America’s schools should include danger avoidance, rights awareness, and get-away skills for teenage girls into every middle and high school’s curriculum; every year, for every girl. “If you do this you will have the most powerful generation of young women in history; girls who aren’t easily tricked, intimidated, or taken. It’s these girls who will turn the tables on the traffickers and put these predators out of business.”